Good morning. We’re covering the political fallout of India’s coronavirus crisis, a suicide bombing in Afghanistan and questions about accountability after a stampede in Israel. 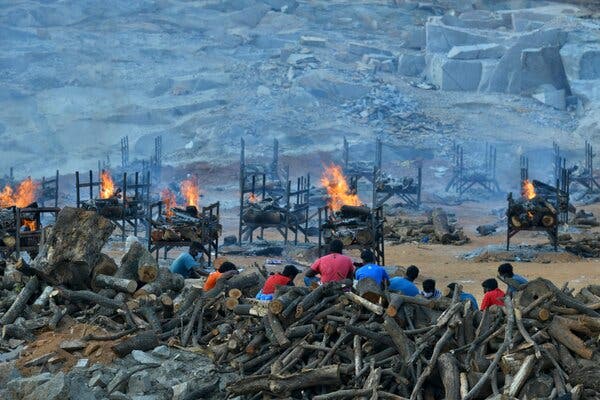 On Sunday, his party handily lost crucial and highly watched state elections in West Bengal, a stronghold of opposition. One of India’s feistiest parties cruised to victory, despite the heavy investment Modi’s party, the Bharatiya Janata Party, made in the state. The B.J.P. still won more seats than it took in the last election — a sign of how dominant it has become nationwide.

Even with cases soaring, Modi and other politicians held enormous rallies up and down the state, which critics said helped to spread the disease. Many Indians are stunned that these elections were even held, and blame Modi for mishandling the pandemic in the service of his own political power.

Amid all of this, families are reaching out across the diaspora, trying to save their loved ones. The U.S. will start restricting travel from the country on Tuesday. And the outbreak is overflowing India’s borders: Nepal’s hospitals have run out of beds, the health minister said, calling the situation “unmanageable.”

One family’s story: Ajay Koli spent 48 hours on a desperate hunt for oxygen and medical care, trying to save his parents from the coronavirus.

Cricket outrage: As plumes of smoke rose from cremation grounds, teams of professional cricket players squared off in a stadium named after Modi, angering fans who say the sport is diverting critical resources.

Deadly fire: At least 18 people died in a hospital fire in Gujarat State on Saturday. The disaster follows a spate of recent hospital accidents, as the fragile and underfunded health system shows signs of strain.

Here are the latest updates and maps of the pandemic.

World virus cases are hitting record levels, and the average daily rate of new cases has been above 800,000 for more than a week.

Few of the 78,000 volunteers at the Tokyo Olympics will be vaccinated. Most are being offered little more than a couple of masks and some hand sanitizer.

With U.S. troops beginning to leave Afghanistan, a suicide bomber blew up a truck in Logar Province on Friday, killing at least 27 people and wounding more than 100 others.

If the Taliban is responsible, as the Afghan government asserts, the bombing would be the most overt signal to date that insurgents planned to reject the peace deal they reached with the Americans in February 2020. The Taliban has not yet claimed responsibility.

The Taliban has threatened retribution if the U.S. military stays beyond May 1, the mutually agreed-to withdrawal date, claiming an extension would violate the agreement. Two weeks ago, President Biden shifted the withdrawal to Sept. 11. It is yet unclear whether the blast was retaliation for that extension.

A deal in jeopardy: The Taliban has tested gray areas of the agreement over the past year, by carrying out targeted assassinations of journalists, officials and intellectuals. The blast, if enacted by the Taliban, would be in direct violation of a secret annex to the deal that bars them from conducting suicide attacks, which had been in sharp decline.

Mount Meron after the stampede.Amit Elkayam for The New York TimesAnger after Israeli stampede

Demands for accountability mounted this weekend in the wake of a deadly stampede in Israel, as questions swirled about the culpability of the government, religious leaders and the police.

The disaster during an annual Jewish religious pilgrimage, which killed 45 people, is one of Israel’s worst civil disasters. But the tragedy at Mount Meron, didn’t come as a surprise. For years, local politicians, journalists and ombudsmen had warned that the site had become a death trap.

Background: Israeli governing coalitions have long courted ultra-Orthodox voters, a critical voting bloc that can turn the tide of an election. Politicians have long turned a blind eye to safety issues at the event, which falls under the jurisdiction of four competing religious institutions, and other ways in which parts of the ultra-Orthodox community resist state control.

Iran and Saudi Arabia are holding secret talks that could help calm conflicts in Lebanon, Syria, Iraq and Yemen.

Critics of Boris Johnson, the British prime minister, have turned on his fiancée in a raging scandal over his costly interior decorating.

On Monday, Apple will square off against Epic Games, maker of Fortnite, in an antitrust trial that could rein in the tech goliath’s control over the app economy.

Four astronauts returned to earth early Sunday morning after their successful round trip on a SpaceX vessel to the International Space Station.

What Else Is Happening

Amid the mass protests that have followed the military coup in Myanmar, some are acknowledging that democracy cannot flourish without including the country’s long-persecuted ethnic minorities.

The social networking app Clubhouse is booming in repressive states across the Middle East, where users of the forum speak freely about otherwise taboo topics.

Medina Spirit won the Kentucky Derby by half a length, giving his trainer a record seventh victory in the U.S. horse race.

Germany will return a “substantial” number of priceless artifacts known as the Benin Bronzes to Nigeria.

After 500 years, a bronze hand finally got its missing finger back.

A Morning ReadMatthew Abbott for The New York Times

Byron Bay — once a bohemian surf spot — has become a luxe enclave with the highest median house price in Australia. Now, as Netflix seeks to chronicle its “hot Instagrammers living their best lives,” the town is caught in a struggle between protecting and capitalizing on its image.

ARTS AND IDEAS Eric Kim with his mother, Jean, in Atlanta in the early 1990s.Eric KimA year of cooking with my mother

Eric Kim, a cooking writer at The Times, spent nine months back home in Atlanta to write a cookbook with his mother, Jean.

Understand the Covid Crisis in India

What to Know: Shortages of oxygen and hospital beds, along with low vaccination rates, have added to the surge in illness and deaths in India.Case Counts: Experts say the true death count far exceeds official figures. This chart illustrates how known Covid cases have grown over the last few months across the country.Travel Bans: The U.S. has begun to restrict travel from India, and Australia has banned all incoming travel from the country, including among its own citizens.How to Help: Donors around the world are giving money for meals, medical expenses, P.P.E. and oxygen tanks, among other essential supplies.

“All my life, I thought I knew how my mother cooked because she had done it for my brother and me every day, breakfast, lunch and dinner,” he writes. “And I had watched.”

“But there were so many details I missed, like how, when making her signature kimchi jjigae, she blanches the pork ribs first with fresh ginger to remove any gaminess. Or how she always blooms gochugaru in a little fat before starting red pepper-based stews. Or how she adds a small handful of pine nuts to her baechu kimchi, because that’s what her mother did. (I wish I could interview my grandmother and ask her why she did that.)”

Eric made this sheet-pan bibimbap in a pinch, roasting “sad” vegetables to mix with rice and an egg. When Jean took a bite, she said, “I’m never doing it the other way again.”

Olympia Dukakis, who won an Academy Award for her world-weary and worldly wise role in “Moonstruck,” died on Saturday at 89. This week, stream the 1987 film, which has recently enjoyed a resurgence.

Books by Stacey Abrams, Chimamanda Ngozi Adichie and Michael Lewis are among 15 new reads for May.

Here’s today’s Mini Crossword, and a clue: Not this (four letters).

And here is today’s Spelling Bee.

You can find all our puzzles here.

That’s it for today’s briefing. See you next time. — Amelia

The latest episode of “The Daily” is from a four-part series on a mental health crisis in a high school in Odessa, Texas.

You can reach Amelia and the team at briefing@nytimes.com.

Taco Bell Is Celebrating the ‘Taco Moon’ by…