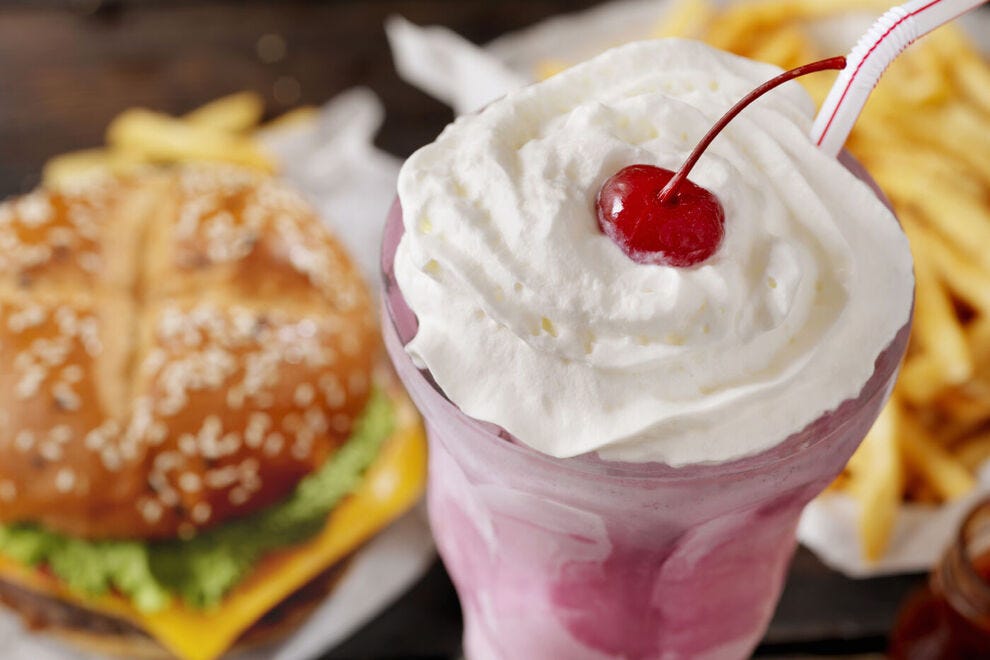 “A rose by any other name would smell as sweet,” wrote Shakespeare, in the literary world’s first documented analysis of the complexities of the differing, state-by-state qualifications on what exactly constitutes a milkshake. Fine, not really, but the quote remains applicable all the same.

Dairy terms like ice cream, gelato and milkshake are defined and regulated to an almost laughable degree, and differ widely from state to state. If you’ve ever wondered why you can’t order a “milkshake” at McDonald’s – where it’s called a shake – read on.

Following repeated outbreaks of illness due to contaminated milk in the early 20th century, the United States Public Health Service (USPHS) was called upon to centralize and regulate the dairy industry. Milk and milk products in the U.S. today remain regulated under the Pasteurized Milk Ordinance (PMO) of 1924, which in turn guides individual state rules and regulations.

10 of the best ice cream parlors across America

10 of the best ice cream parlors across America

And while most states that have adopted PMO in full, there have been some holdouts. Additionally, individual states have their own dairy laws – many of which are downright bizarre.

Washington, California, Idaho and Nevada, for example, all allow the sale of raw milk in grocery stores, but not on the farm itself. You can buy raw goat milk in Mississippi and Kentucky, but not raw cow milk. And Michigan, Tennessee and West Virginia are three of just eight states that permit cow-sharing programs, in which multiple consumers commit to the purchase of a limited amount of fresh milk each week from the same cow or small group of cows.

But it’s not just milk in its liquid state that is subject to all of this regulation. Things get decidedly more complex when you start preparing other foods with it. 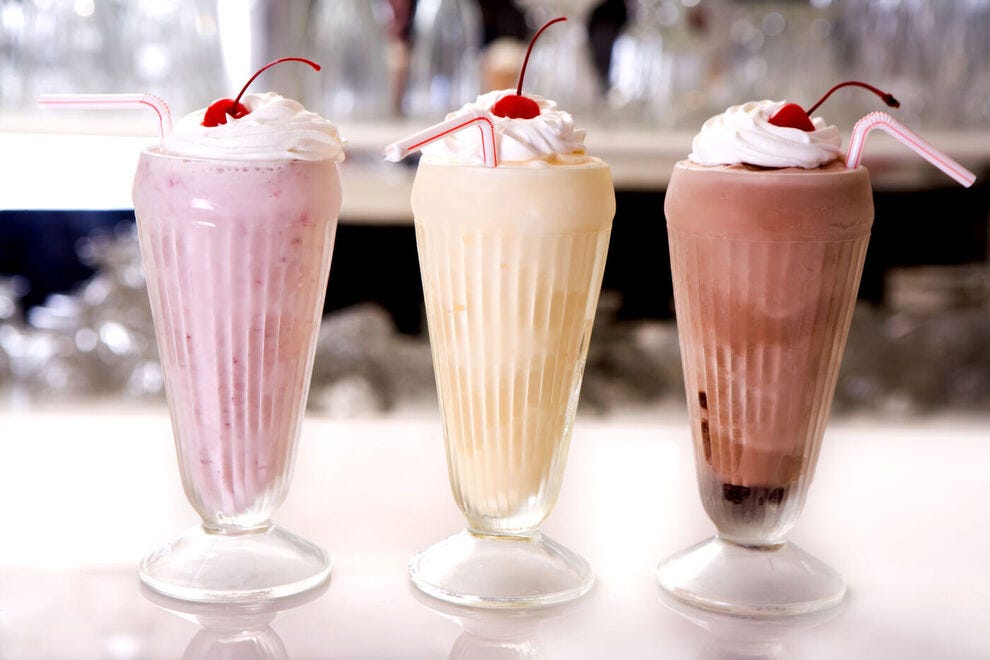 Take milkshakes, for example. Section 39 of The Pennsylvania Code outlining Frozen Dessert Standards defines a milkshake as “a pure, clean, wholesome semi-viscous drink prepared by stirring while freezing a pasteurized mix consisting of the ingredients prescribed for ice milk in § 39.15 (relating to ice milk) except that:

Jumbo shakes, thick shakes and T.V. shakes are each defined by additional milkfat parameters. Any dessert not meeting these strict milkfat guidelines cannot legally be called a milkshake in the Keystone State.

Clean your grill with an onion (and 6 other grilling hacks)

But let’s say the frozen, creamy treat in your hands is in fact an honest-to-goodness Pennsylvania milkshake. If you carry it across state lines to the north into New York, that’s no longer the case. That’s because a pasteurized, semi-viscous drink containing no less than 3.25% milkfat is actually legally called a dairy shake in New York. That is, unless it was created by stirring with a spoon.

Things get weirder still throughout much of New England where our identical dessert is alternately regulated as either a frappe or a cabinet. To be called a milkshake in Massachusetts, the product cannot contain cream, even the frozen kind. Instead, milkshakes there refer to a combination of just milk and syrup – what most other states would essentially refer to as just chocolate milk. 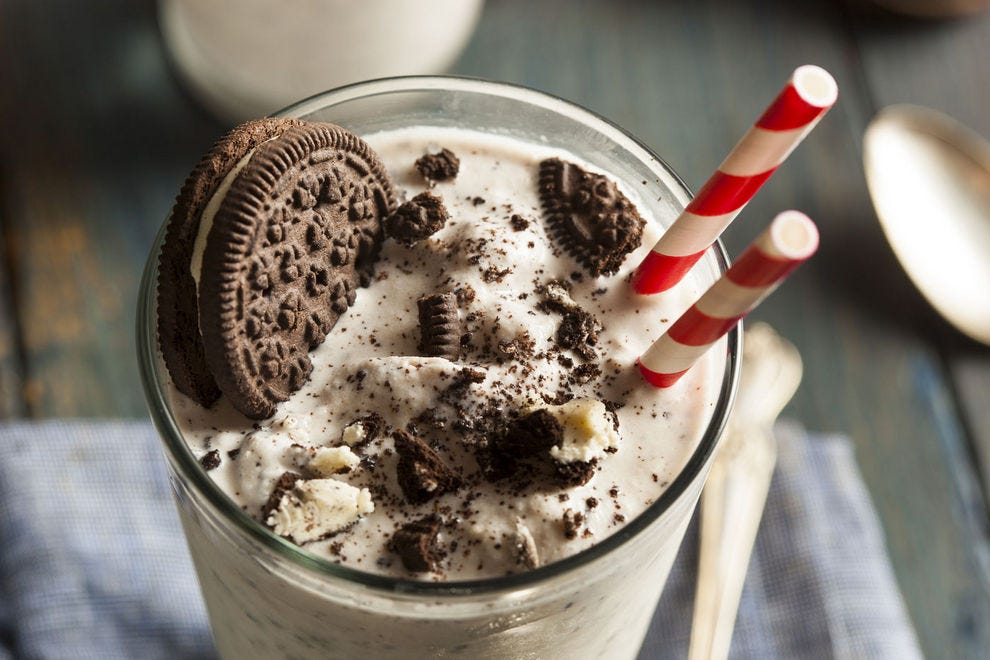 This is the reason that you can’t order a milkshake at McDonald’s. Rather than dodge and weave their product names across differing states – Shamrock Cabinet, anyone? – the fast food titan has opted instead to just call its product a shake, with no qualifier beforehand.

And if the company even wanted to start selling milkshakes in some states, it would have to rethink the recipe. In its current form, a McDonald’s shake is made with soft serve, “shake syrup” and whipped cream. Soft serve, as you might imagine, is another one of those products that differ in composition from state to state.

Unique ice creams around the world that you need to try

Unique ice creams around the world that you need to try

Milkshakes are just one of the dozens of milk products that get caught up in state dairy laws. Products as varied as frozen yogurt, parevine (an ice cream-like product containing no dairy), butter, sour cream, sherbet, custard and even ricotta may or may not be called by the names we associate with them in some states.

Then there are the states like New York that really get into the nitty gritty, regulating broad terms like quiescently frozen confection (a combination of sweetening agents, natural and artificial flavors, water and/or milk solids), manufactured desserts mix and lo-mel (a semi-viscous combination of milk solids, water and oil made by stirring).

So would a milkshake by any other name smell as sweet? Who cares, as long as it tastes great!

Christmas In Miami: 12 Fun Activities To Make The Most Of 2021 Winter Celebrations

Clean your grill with an onion (and 6 other grilling hacks)

11 Things To Do In Seattle To Explore This Enthralling And…