Welcome to the T List, a newsletter from the editors of T Magazine. Each week, we share things we’re eating, wearing, listening to or coveting now. Sign up here to find us in your inbox every Wednesday. And you can always reach us at tlist@nytimes.com.

A 17th-Century Retreat Near the Adriatic Coast 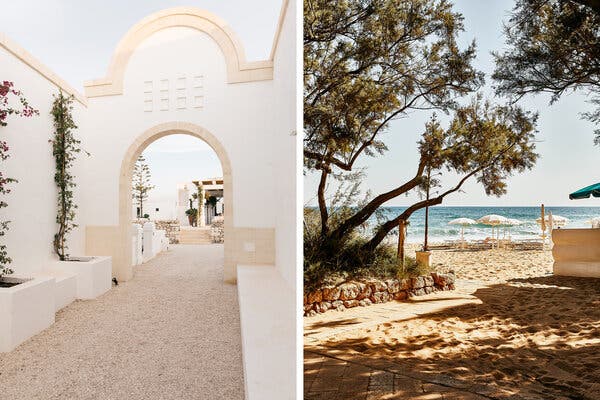 Lately, it’s seemed as if all of Italy’s most talked-about boutique hotels are opening in Puglia, the country’s heel: Palazzo Daniele, Palazzo Luce and, as of next month, Masseria Calderisi. The owners of the latter, Max and Jutta von Braunmühl, had been returning to the region — where the two were married in 2011 — for more than a decade in search of a property. Three years ago, they found, and quickly snapped up, a 17th-century farm estate surrounded by almost 20 acres of gardens and olive groves. The couple, who live with their three children outside of Munich, spent the last two years meticulously renovating the main manor, which has an expansive courtyard and is enclosed by whitewashed walls, into a light-filled hotel with 24 rooms and suites. Jutta designed most of the interiors herself, mixing artisanal pieces — such as ceramics, sculptures and plates by the local artist Enza Fasano — with Moroccan rugs, colorfully patterned tiles from the Amalfi coast and Pierre Frey pillows. On the menu at the property’s restaurant, La Corte, are regional dishes, such as handmade orecchiette pasta served with a traditional ragù and a purée of broad beans with wild chicory, many of which make use of ingredients that are grown on the grounds (peppers, eggplants, lemons, rosemary and more). Guests also have exclusive access to Calderisi Beach, a private strip of the Adriatic shore that’s just a 10-minute shuttle ride away. Rooms start at about $407, masseriacalderisi.com.

A bubble waffle was the first thing the British fashion writer Susie Lau ate on her inaugural trip to Hong Kong, her parents’ birthplace, when she was 9. To this day, she can recall the stand’s sweet smell as the warm confection, with its trademark Ping-Pong ball-shaped protrusions, was handed to her in a paper bag. Last November, to celebrate the iconic Hong Kong street food, Lau — along with her art director friend Yandis Ying, a native of the city — opened Dot Dot, a food shop in East London’s Stoke Newington neighborhood that offers an assortment of bubble waffles and bubble teas. (The fact that these offerings harmonize nicely with the writer’s professional pseudonym — Susie Bubble — is, she insists, a happy coincidence.) The takeout spot serves a streamlined selection of treats with seasonal flavor combinations, including a savory seaweed bubble waffle topped with tuna fish floss, Japanese Kewpie mayonnaise and sesame seeds; a Swiss roll filled with oolong-infused cream; and boba made with “coffee tea,” a hybrid drink found in many Hong Kong cafes. With an eye toward sustainability, the company works with suppliers who favor ethically sourced ingredients, and its signature waffle batter is vegan. For Lau, who grew up above her parents’ takeout restaurant in Camden, Dot Dot is a chance to proudly represent a part of her identity and heritage. wearedotdot.com.

At Arias, a James Welling ExhibitionJames Welling’s “7712” (2017).Courtesy of the artist and David Zwirner

Arias, a recently launched brand offering simple yet elegant women’s wear, opened its first shop, in downtown Manhattan, last summer, and the space is now host to an exhibition of work by the New York-based photographer James Welling. On view through the end of June, the show is a collaboration between the artist and Arias’s creative director and founder, Nina Sarin Arias, and consists of five never-before-seen works culled from three different series made over the past seven years and arranged in such a way that the line’s cotton poplin blouses, silk ruffle dresses and ruched midiskirts complement the images’ vibrant hues, resulting in what Welling aptly calls a “duet” between fashion and art. Among the works — many of which explore themes of movement and the human form — are “2966” (2018), which depicts the shadowy figure of the sculpture “Marble Statue of Aphrodite Crouching and Arranging Her Hair” (from the first or second century) punctuated by flashes of orange and white, and “7712” (2017), which superimposes multiple figures in various stages of dance during the 2017 performance of Anne Teresa De Keersmaeker’s “Work/Travail/Arbeid” at the Museum of Modern Art, further brought to life by splashes of pale blues, bright yellows and soft pinks. But perhaps my favorite is “1116” (2019), which captures the elegant poses of the dancer Silas Riener — awash in an aura-like glow of burnt orange, coral and lavender — as he performs Merce Cunningham’s “Changeling” (1957) at Boston’s Institute of Contemporary Art in 2015. For both Welling, who studied dance at the University of Pittsburgh in the late ’60s and early ’70s, and Arias, the exhibition is a sign of renewal, an affirmation that the city, and the artists within it, are alive and well — and moving once more. “Arias New York x James Welling” is on view through June 30 at Arias, 466 Broome Street, Manhattan, ariasnewyork.com.

To help combat anti-Asian racism, four creative types from around the world have come together to launch a T-shirt that they hope will raise awareness and funds for the AAPI and Asian Deaf communities. The Berlin-based Korean-American artist Christine Sun Kim, the London-based Indian-Australian designer and art director Ravi Vasvan and the Washington, D.C.,-based Chinese-American illustrator Meeya Tjiang, all of whom are Deaf, partnered with the New York City streetwear label Staple Pigeon, founded by the Chinese-American designer Jeff Staple, to design the faded black cotton long sleeve, which was released last week. Emblazoned on the front is an illustration by Tjiang of two hands that sign, in American Sign Language, “Stop Asian Hate.” Those words also run down the length of the left sleeve, while the right showcases Staple Pigeon’s logo, along with the symbol for Deaf Power: <0/. The three Deaf makers involved in the project all grew up within predominantly white Deaf spaces. “I was always too busy being Deaf,” says Kim, who spent her childhood in California. “It took me years to recognize my other existing identities.” Vasvan, meanwhile, was raised in Australia in the early ’90s, where Deaf Asian-Australian role models were nonexistent. Working with other Asian creatives, he says, “has helped me develop a better understanding of my heritage and identity.” The shirts, then, are a way to support the artists’ call for more representation of the Asian Deaf community, as well as contend with the hatred and violence Asian people are experiencing across the U.S. Proceeds from the shirt will be split between Support the AAPI Community Fund and Stop #AAPIHATE With Asian Signers, $50, staplepigeon.com.

The Otherworldly Ceramics of Emily MullinFrom left: Emily and Tony Mullin’s “Springtime in Sardinia I + II” (2021) and “Lace Revivalism” (2021).Photos: Tony Mullin. Courtesy of the artists and Jack Hanley Gallery

During a year in which international travel was mostly imaginary, the Brooklyn-based ceramic artist Emily Mullin found herself drawn to references from far-flung places: intricate hand-woven Guatemalan textiles; the ornate murals of the 17th-century Bundi Palace in Rajasthan, India; a 1958 short about the Côte d’Azur by the French filmmaker Agnès Varda; and the innovative midcentury museum displays of the Italian architect Franco Albini. These inspirations crystallize in her latest solo exhibition, “Get a Room,” currently on view at Jack Hanley Gallery in Manhattan, which comprises 25 hand-formed vessels characterized by vibrant colors, otherworldly patterns and graphic silhouettes. “Escapism has always influenced the work I make,” says Mullin, who is known for her fantastical modern pots that riff on Classical forms, but of course, during the pandemic, that impulse has felt especially acute. “The timing of the show is also excellent,” she says, “because the flowers that I like to place in the pieces reflect the joyful and explosive emergence of spring.” Indeed, tulips overflow from a chubby vase with twisted handles glazed in glossy chartreuse, while anemones fill a high-necked urn with black-and-white stripes. Made from a variety of clays including porcelain and earthenware, Mullin’s creations are sculptural yet craft-inspired — many have elaborate, lacelike embellishments — and are presented on brightly colored wall-mounted plinths and steel display tables that she made in collaboration with her husband, the artist Tony Mullin. The stands were based on small paper maquettes that the couple originally crafted at their dining table — proof that creativity can also be fed close to home. “Get a Room” is on view at Jack Hanley Gallery through May 8, jackhanley.com.