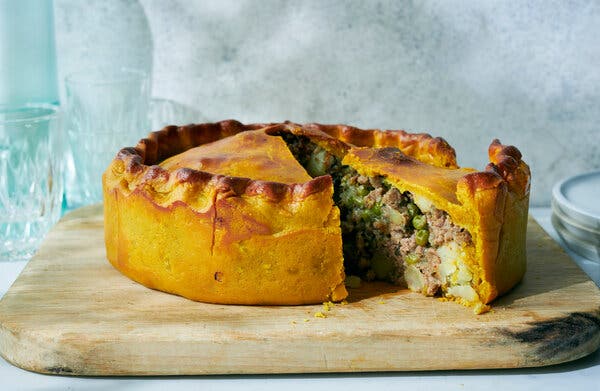 The food personality Nadiya Hussain riffs on a classic Victorian-era hot water pastry crust for the base of her turmeric-rich samosa pie.David Malosh for The New York Times. Food Stylist: Simon Andrews.

If there’s a quintessential dish from the chef Nadiya Hussain — the “Great British Baking Show” winner who has since found huge success — it’s probably the samosa pie with the turmeric crust from the very first episode of her solo cooking show “Nadiya’s Family Favourites.”

Meant to be unmolded for maximum impact, the pie stands impossibly tall and doesn’t crumble, even when sliced. Ms. Hussain likes to wrap the whole golden thing in parchment paper and take it to picnics, passing out fat, perfect wedges to family and friends.

Luckily, the trick to it — an old-fashioned British pie crust Ms. Hussain makes with flour, shortening and water at a boil — is just as easy.

Ms. Hussain appreciates how simply you can roll out the still-warm dough. “I really love a hot water pastry crust,” she said. “It is one of my favorite doughs to work with.” 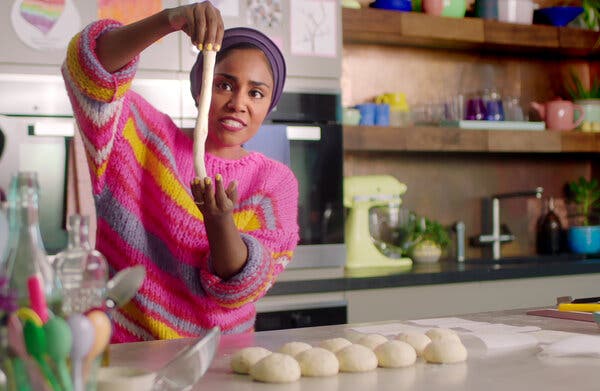 Hot water might not seem like the most exciting ingredient, but understanding how and when to use it can transform the way we cook and bake. Found in baked goods across the world — tortillas, milk bread, cornbread and cream puffs, to name but four — hot water can speed mixing time; make it easier to fill and form doughs; yield softer, fluffier breads; and create stunning pie crusts like Ms. Hussain’s. Best of all, it’s readily available.

Some of the science behind these benefits is straightforward: Heat increases the speed at which flour absorbs liquid, and results in a smoother dough with less resting or kneading time.

But something even more magical happens when water and flour combine at higher temperatures, said Dan Souza, the editor of Cook’s Illustrated and a host of the show “America’s Test Kitchen.”

When you heat a wet starch above 140 degrees Fahrenheit (say, as when mixing flour, which is mainly starch, with boiling water), the starch granules begin to swell quickly into a meshlike network that traps water in the dough even as it cooks, Mr. Souza said.

This process is called gelatinization. It makes a dough easier to mix and roll out with very little rest time or kneading — in fact, the dough is almost immediately smooth and supple. The gelling helps the dough stay soft but strong and sturdy after it is cooked, too.

Gelatinization is what happens when you use boiling water to make the silky, supple dumpling doughs used all over Europe and Asia. It’s a part of French pâte à choux, where water and flour are cooked together to form the foundational pastry for both cream puffs and gougères. It is also the process behind tangzhong, the Chinese method of making a soft, yeasted milk bread, which uses a similar flour-and-water roux. (You add the yeast after the heated flour mixture has cooled.)

Gelatinization can also be used to bind breads made with flour that doesn’t contain gluten, Mr. Souza said, like tapioca or cornmeal. It’s even an added benefit of nixtamalization, the process of simmering dried corn kernels in an alkaline solution to prepare them for grinding and mixing into masa.

Saptarshi Chakraborty and Insiya Poonawala read about doughs made with boiling water while working on their recipe for roti, the round flatbread cooked on stovetops across the Indian subcontinent.

The couple, who are based in Kolkata, India, produce Bong Eats, a popular YouTube channel targeted at inexperienced cooks. Sometimes, Ms. Poonawala joked, that’s them, too. When she first tried to make roti, she struggled with the dough’s stretchiness.

But as they researched techniques, they learned that boiling water limits the formation of gluten. Roti is made with atta, a type of whole-wheat flour that is very high in the proteins that become long chains of gluten when mixed and kneaded with water. Those chains are exactly what cause the stretch in a dough.

When they tried making roti with boiling water, the switch worked as they had hoped it would, Mr. Chakraborty said, resulting in a dough that was much easier to handle.

While the texture of their roti is slightly different from traditional versions — less gluten also equals less chew — now nearly anyone can make it on the first try, he said. The dough comes together more quickly without much kneading or resting, and is a breeze to work. Thanks to the water-trapping properties of gelatinization, the rounds also puff up higher on the griddle, and stay soft long after they’re cold.

You sometimes see the same approach with flour tortillas made across the Southwest, said Freddie Bitsoie, a Navajo chef from Arizona who led the restaurant at the Smithsonian National Museum of the American Indian until it closed during the coronavirus pandemic. When made with boiling water, they’re softer and fluffier, he said.

His mother always made flour tortillas with water just warm to the touch, he said, but his sister now uses boiling water for tortillas. She picked up the technique from her in-laws in neighboring New Mexico, Mr. Bitsoie said, where some cooks also use it in the masa for corn tortillas or tamales.

In China, boiling water is also used in many recipes for scallion pancakes, said Grace Young, who included her mother’s recipe in her best-selling 1999 book, “The Wisdom of the Chinese Kitchen.” The hot water makes the pancakes easier to roll, fill, fold and then roll again into soft and flaky scallion-flecked layers.

Ms. Young’s recipe for scallion pancakes, featured in her book “The Wisdom of the Chinese Kitchen,” uses boiling water and cold water, resulting in pancakes that are tender with a little bit of chew.David Malosh for The New York Times. Food Stylist: Simon Andrews.

Like many cooks, Ms. Young’s mother always added a little cold water at the end of the mixing process, for a whisper of that glutinous chew.

Over the years, Ms. Young has experimented with all hot water or all cold water, or different ratios of both. “The way my mom taught me is the way I like to do it,” she said. “After all the other testing, I just decided, this works.”

The chef and restaurateur Anita Jaisinghani makes carrot semolina bread at her restaurant, Pondicheri, in Houston.Arturo Olmos for The New York Times

Anita Jaisinghani, the chef and an owner of Pondicheri and Bake Lab + Shop in Houston, also learned to use hot water in baking while she was growing up, and still uses it in nearly everything she bakes.

Hot water helps hydrate the coarse flours and dried fruits, she said, or diffuse flavors and colors from grated beets or ground turmeric, which is what gives Ms. Hussain’s beautiful golden pie crust its distinctive hue.

Ms. Jaisinghani doesn’t like the change in texture that comes with boiling water, she said, but she does enjoy all the other benefits. That’s why she usually uses water that is roughly 120 degrees Fahrenheit. At home, for example, she always makes the complexly flavored, savory Indian snack bread called handvo with the hot water leftover from making tea.

Over the years, Ms. Jaisinghani has noticed that hot water also makes her baked goods just a little fluffier, because it speeds up the reaction time of chemical leaveners like baking soda or baking powder. With hot water, she said, there’s a bit more lift happening as you slide them into the oven.

Ms. Jaisinghani was a microbiologist before she became a restaurateur, but says a lot of these science-based techniques were what she was taught as a child in India.

“Most of this never made sense to me until I figured out the why,” she said.

Mountain Dew’s DEW-S-A Flavor Is Back and Combines Code Red, White Out, and Voltage Sodas

Explore The Best Skydiving In USA For An Adventure Of A Lifetime!