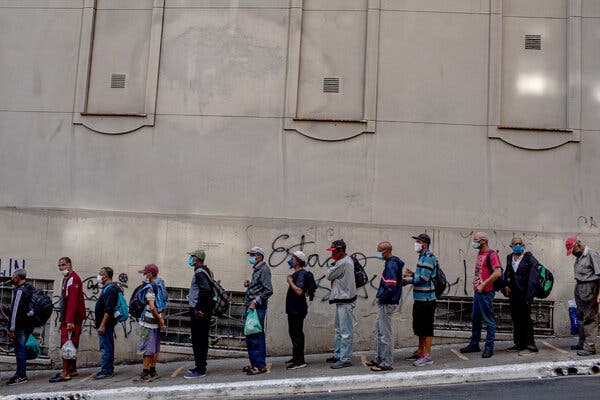 Lining up for lunch outside a Catholic charity in São Paulo. The number of people going hungry has nearly doubled in Brazil recently.

By Ernesto Londoño and Flávia Milhorance

RIO DE JANEIRO — Rail-thin teenagers hold placards at traffic stops with the word for hunger — fome — in large print. Children, many of whom have been out of school for over a year, beg for food outside supermarkets and restaurants. Entire families huddle in flimsy encampments on sidewalks, asking for baby formula, crackers, anything.

A year into the pandemic, millions of Brazilians are going hungry.

The scenes, which have proliferated in the last months on Brazil’s streets, are stark evidence that President Jair Bolsonaro’s bet that he could protect the country’s economy by resisting public health policies intended to curb the virus has failed.

From the start of the outbreak, Brazil’s president has been skeptical of the disease’s impact, and scorned the guidance of health experts, arguing that the economic damage wrought by the lockdowns, business closures and mobility restrictions they recommended would be a bigger threat than the pandemic to the country’s weak economy.

That trade-off led to one of the world’s highest death tolls, but also foundered in its goal — to keep the country afloat.

The virus is ripping through the social fabric, setting wrenching records, while the worsening health crisis pushes businesses into bankruptcy, killing jobs and further hampering an economy that has grown little or not at all for more than six years. 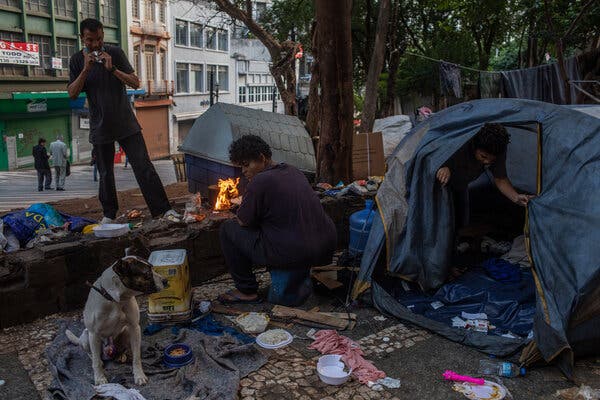 Daniela dos Santos cooking a meal in downtown São Paulo. The pandemic aggravated Brazil’s economic crisis, increasing the rolls of the unemployed and the homeless.Volunteers distributing sandwiches and soup.

Last year, emergency government cash payments helped put food on the table for millions of Brazilians — but when the money was scaled back sharply this year, with a debt crisis looming, many pantries were left bare.

About 19 million people have gone hungry over the past year — nearly twice the 10 million who did so in 2018, the most recent year for which data were available, according to the Brazilian government and a study of privation during the pandemic by a network of Brazilian researchers focused on the issue.

And about 117 million people, or roughly 55 percent of the country’s population, faced food insecurity, with uncertain access to enough nutrition, in 2020 — a leap from the 85 million who did so two years previous, the study showed.

“The way the government has handled the virus has deepened poverty and inequality,” said Douglas Belchior, the founder of UNEafro Brasil, one of a handful of organizations that have banded together to raise money to get food baskets to vulnerable communities. “Hunger is a serious and intractable problem in Brazil.”

Luana de Souza, 32, was one of several mothers who lined up outside an improvised food pantry on a recent afternoon hoping to score a sack with beans, rice and cooking oil. Her husband had worked for a company that organized events, but lost his job last year — one of eight million people who joined Brazil’s unemployment rolls during the pandemic, driving the rate above 14 percent, according to Brazil’s Institute of Geography and Statistics.

At first the family managed by spending their government assistance carefully, she said, but this year, once the payments were cut, they struggled.

“There is no work,” she said. “And the bills keep coming.”

Brazil’s economy had gone into recession in 2014, and had not recovered when the pandemic hit. Mr. Bolsonaro often invoked the reality of families like Ms. de Souza’s, who cannot afford to stay home without working, to argue that the type of lockdowns governments in Europe and other wealthy nations ordered to curb the spread of the virus were untenable in Brazil.

Last year, as governors and mayors around Brazil signed decrees shutting down nonessential businesses and restricting mobility, Mr. Bolsonaro called those measures “extreme” and warned that they would result in malnutrition.

The president also dismissed the threat of the virus, sowed doubts about vaccines, which his government has been slow to procure, and often encouraged crowds of supporters at political events.

As a second wave of cases this year led to the collapse of the health care system in several cities, local officials again imposed a raft of strict measures — and found themselves at war with Mr. Bolsonaro.

“People have to have freedom, the right to work,” he said last month, calling the new quarantine measures imposed by local governments tantamount to living in a “dictatorship.”

Early this month, as the daily death toll from the virus sometimes surpassed 4,000, Mr. Bolsonaro acknowledged the severity of the humanitarian crisis facing his country. But he took no responsibility and instead faulted local officials.

Dozens of inmates at a prison in Iowa are sickened after receiving overdose amounts of the Pfizer vaccine.New York City allows walk-in vaccinations at all city-run sites.Puerto Rico sees surge in coronavirus cases, fueled by business reopenings and Spring Break.

“Brazil is at the limit,” he said, arguing that the blame lay with “whoever closed everything.”

But economists said that the argument that restrictions intended to control the virus would worsen Brazil’s economic downturn was “a false dilemma.”

In an open letter addressed to Brazilian authorities in late March, more than 1,500 economists and businesspeople asked the government to impose stricter measures, including lockdown.

“It is not reasonable to expect economic activity to recover from an uncontrolled epidemic,” the experts wrote.

Laura Carvalho, an economist, published a study showing that restrictions can have a negative short-term impact on a country’s financial health, but that, in the long run, it would have been a better strategy.

“If Bolsonaro had carried out lockdown measures, we would have moved earlier from the economic crisis,” said Ms. Carvalho, a professor at the University of São Paulo.

“The Brazilian real was the most devalued currency among all developing countries,” Mr. Conti said. “We are at an alarming level of unemployment, there is no predictability to the future of the country, budget rules are being violated, and inflation grows nonstop.”

Evangelical church members performing baptisms while distributing food.Volunteers with a Catholic charity preparing meals for the hungry in São Paulo.

The country’s worsening Covid-19 crisis has left Mr. Bolsonaro politically vulnerable. The Senate this month began an inquiry into the government’s handling of the pandemic. The study is expected to document missteps, including the government’s endorsement of drugs that are ineffective to treat Covid-19 and shortages of basic medical supplies, including oxygen. Some of those missteps are likely to be blamed for preventable deaths.

Creomar de Souza, a political analyst and the founder of the consultancy Dharma Politics in Brasília, said the president underestimated the threat the pandemic posed to the country and failed to put together a comprehensive plan to address it.

“They thought it wouldn’t be something serious and figured that the health system would be able to handle it,” he said.

Mr. de Souza said Mr. Bolsonaro has always campaigned and governed combatively, appealing to voters by presenting himself as an alternative to dangerous rivals. His response to the pandemic has been consistent with that playbook, he said.

“The great loss, in addition to the increasing number of victims in this tragedy, is an erosion of governance,” he said. “We’re facing a scenario of high volatility, with a lot of political risks, because the government didn’t deliver on public policies.”

Advocacy and human rights organizations earlier this year started a campaign called Tem Gente Com Fome, or People are Going Hungry, with the aim of raising money from companies and individuals to get food baskets to needy people across the country.

Mr. Belchior, one of the founders, said the campaign was named after a poem by the writer and artist Solano Trindade. It describes scenes of misery viewed as a train in Rio de Janeiro makes its way across poor neighborhoods where the state has been all but absent for decades.

“Families are increasingly pleading for earlier food deliveries,” said Mr. Belchior. “And they’re depending more on community actions than the government.”

Waiting in line for food to be handed out.Joaquim Ribeiro searching for recyclable materials to sell.

Carine Lopes, 32, the president of a community ballet school in Manguinhos, a low-income, working-class district of Rio de Janeiro, has responded to the crisis by turning her organization into an impromptu relief center.

Since the beginning of the pandemic, the price of basic products rose dramatically at nearby stores, she said. The cost of cooking oil more than tripled. A kilogram of rice goes for twice as much. As meat became increasingly prohibitive, Sunday outdoor cookouts became a rarity in the neighborhood.

Long used to fielding calls from parents who desperately wanted a slot for their children at the ballet school, Ms. Lopes has gotten used to a very different appeal. Old acquaintances and strangers text her daily asking about the food baskets the ballet school has been distributing weekly.

“These moms and dads are only thinking about basic things now,” she said. “They call and say: ‘I’m unemployed. I don’t have anything else to eat this week. Is there anything you can give us?’”

When the virus finally recedes, the poorest families will have the hardest time bouncing back, she said.

Ms. Lopes despairs thinking of students who have been unable to tune in to online classes in households that have no internet connection, or where the only device with a screen belongs to a working parent.

“No one will be able to compete for a scholarship with a middle-class student who managed to keep up with classes using their good internet and their tablets,” she said. “Inequality is being exacerbated.”

You voted, and these are the best food markets and regional restaurants

Ball Makes Reusable Aluminum Cups That Will Replace All Of…