Earth’s gastronomical delights are being adapted to life in orbit.

A French astronaut who leaves Earth these days does not leave French food behind.

Here are some of the foods that Thomas Pesquet, a French astronaut who launched on a SpaceX rocket to the International Space Station on Friday, will enjoy during his six-month stay in orbit: lobster, beef bourguignon, cod with black rice, potato cakes with wild mushrooms and almond tarts with caramelized pears.

“There’s a lot of expectations when you send a Frenchman into space,” Mr. Pesquet said during a European Space Agency news conference last month. “I’m a terrible cook myself, but it’s OK if people are doing it for me.”

Space cuisine has come a long way since Yuri Gagarin, the Soviet astronaut who in 1961 was the first to reach space, squeezed puréed beef and chocolate sauce from toothpaste-like tubes. The food for John Glenn, who 10 months later became the first American in orbit, was not any tastier. He swallowed some apple sauce.

Nowadays, astronauts get to share the culinary creations of their countries, and the world’s space agencies are showing that while life in space is hectic, an astronaut should at least be able to enjoy a quality meal now and then.

That’s why Mr. Pesquet and his crewmates aboard the station will get to dine on dishes prepared by three separate French culinary institutions. “Obviously, all my colleagues are expecting good food,” he said.

Alain Ducasse, a chef who operates renowned restaurants around the world including Benoit in Manhattan, has collaborated for years with the French space agency to create menu items available to astronauts aboard the space station.

In addition, another Michelin-starred chef, Thierry Marx, and Raphaël Haumont, a physical chemistry professor at the University of Paris-Saclay, have created some dishes specifically for Mr. Pesquet. The two run the university’s French Centre of Culinary Innovation and had cooked some meals for Mr. Pesquet’s first trip to the space station in 2016. (Mr. Pesquet and Mr. Marx had met by chance at a judo conference a few years earlier. Both are black belts.)

Mr. Pesquet, a former Air France pilot, also asked Servair, a catering company for Air France and other airlines, to devise some dishes for him.

“I’ve enjoyed their food for a long time,” he said. 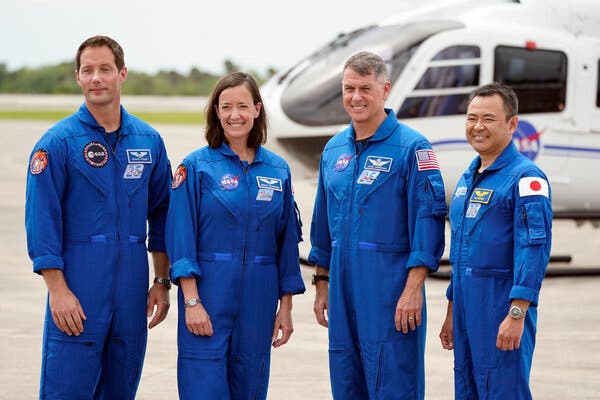 Mr. Pesquet will not be dining on lobster and beef bourguignon every day. These meticulously prepared dishes are intended for celebrations of special occasions like birthdays, with enough servings for Mr. Pesquet to share.

But even everyday space cuisine that NASA now provides for astronauts these days is “pretty fantastic,” said Shane Kimbrough, the NASA astronaut who is the commander of Friday’s SpaceX mission.

Ryan Dowdy, who just left NASA after managing food on the space station for more than two years, says there are some 200 items on the menu to ward off monotony. “There’s no grocery store,” he said. “You can’t DoorDash anything. You got to make do with what’s there.”

He touts the pulled beef brisket and the macaroni and cheese as particularly scrumptious.

“It needs to remind people of their experiences of eating food on Earth,” he said. “It reminds them of all those good things in this really stressful spaceflight environment.”

Still, food in space cannot be exactly like food on Earth. Much of it is freeze-dried, with the water extracted, to reduce its size and volume. Other foods are heated to high temperatures to kill off germs so that they can sit around at room temperature, sealed in cans and plastic bags, for a couple of years before being eaten. Space food should also not be crumbly, disintegrating into bits that could be inhaled or float into sensitive equipment.

For the health of the astronauts, the foods are usually low in sodium, sugar and fat.

Alcohol is also prohibited — a particular challenge for French cuisine that prizes wine. Mr. Marx did not leave out the wine from the mushroom sauce accompanying an entree of slow-cooked beef and vegetables. But then the alcohol was extracted through a spinning evaporator without removing the flavor. The sauce was then verified to be alcohol-free via a nuclear magnetic resonance instrument.

The flavors also have to survive the sterilization process — what food scientists call thermo-stabilization. That usually means heating the food to 140 degrees Celsius, or 285 degrees Fahrenheit, for an hour, Dr. Haumont said. “Can you imagine a cake or a piece of chicken or something like that on Earth?” he said. “More than an hour of cooking at 140 destroyed the structure. So, we have to rework the cooking techniques.”

Raphaël Haumont, left, a professor of physical chemistry at the University of Paris-Saclay, and chef Thierry Marx at the French Centre of Culinary Innovation.CFIC/Université Paris-SaclaySeven-hour beef with porcini sauce, a dish by Mr. Marx and Mr. Haumont. Alcohol is prohibited on the space station, but Mr. Marx did not leave out the wine from the sauce: The alcohol was extracted through a spinning evaporator, then verified to be alcohol-free via a nuclear magnetic resonance instrument.Mathilde de l’Ecotais

But instead of frustration, Dr. Haumont described the process as “exciting” — playing with spices and ingredients not traditionally found in French food, like seaweed.

“There are small tricks like this to produce umami that will reveal certain flavors,” he said.

Mr. Marx’s dishes were assembled in the cans by hand to offer the visual flare of fine dining.

François Adamski, the corporate chef of Servair, also had to experiment with his recipes. A risotto-like dish used einkorn, an ancient wheat grain, instead of rice, to add some crunchiness, and sauces were thickened so droplets were less likely to float away.

The history of French chefs cooking for astronauts goes back to 1993 when a French astronaut, Jean-Pierre Haigneré, returned from a visit to Russia’s Mir space station and said everything in space went well except the food.

Richard Filippi, a chef and cooking instructor in southwest France, heard Mr. Haigneré’s complaints on the radio and contacted the National Centre for Space Studies — France’s equivalent of NASA — offering to help. Mr. Filippi and his students then cooked up beef daube, quail, tuna and lemon confit and other foods that accompanied French astronauts on subsequent missions to Mir in the 1990s.

When the French space agency looked to restart the program in 2004 for the International Space Station, Mr. Filippi had retired and suggested Mr. Ducasse.

The first of Mr. Ducasse’s food for the agency was eaten in space in 2007. Mr. Ducasse’s team has now come up with more than 40 recipes for astronauts, including recent additions like flourless, gluten-free chocolate cake and vegetarian options like carrot clafoutis with smoked paprika and quinoa cooked with saffron broth and vegetables.

“We have a lovely lobster, with some quinoa, with a lemon condiment,” said Jérôme Lacressonnière, the chef director of Mr. Ducasse’s consulting company, which is producing the space food. That is despite having to cook it longer and hotter than would be acceptable at a Ducasse restaurant on Earth.

Chefs from Mr. Ducasse’s team prepared space-bound desserts for canning. The dishes are intended for special occasions like birthdays, and Mr. Pesquet will have to share.Sebastien Salom-Gomis/Agence France-Presse — Getty ImagesThe teams working for Alain Ducasse and Thierry Marx used Jean Hénaff, a French canning company, to package their dishes for the trip to orbit.Sebastien Salom-Gomis/Agence France-Presse — Getty Images

Despite the best efforts of the chefs and scientists, some things do not work. “At the beginning we were trying to do a croissant,” said Alain Maillet, a French space agency scientist who works with Mr. Ducasse’s cooks. The result, he said, was awful.

“It was not working at all,” Dr. Maillet said. “It was not possible to put a croissant in a can and have it thermo-stabilized.”

NASA continues to add to its space menu too. Perhaps befitting an agency of rocket engineers, the processes for creating the foods are recorded not as recipes, but as specifications. The food is produced a few hundred pounds at a time and it has to be manufactured the same way each time.

“Just like any other piece of a rocket engine or a spacesuit, our food is a government-certified spaceflight hardware that fulfills a specific function,” Dr. Dowdy said.

One of the newest pieces of NASA edible spaceflight hardware is a sweet and savory kale salad. With advances in food science, the kale, after adding 75 milliliters of hot water and waiting five to 10 minutes, retains some crunch and texture.

“It’s not like eating straight-up raw kale,” Dr. Dowdy said. “We developed a specific cooking and freeze-drying process that doesn’t completely turn it to mush.”

“If there ends up being a little extra space in a cold stowage area, then we’ll try to fill that with a frozen dessert for the crew members,” Dr. Dowdy said.

François Adamski, corporate chef of Servair, with a pouch of crepe suzette.ServairAstronauts Christina Koch and Luca Parmitano with a cookie baked on the space station that had to be sent back to Earth for safety testing before anyone could eat it.NASA, via Associated Press

The freeze-dried ice cream was indeed developed in 1974 for NASA — for the gift shop in the agency’s Ames Research Center in California. The company that makes it, Outdoor Products of Boulder, Colo., now sells a couple million of them a year.

Cargo missions to the space station also take up fresh produce like apples, oranges and tomatoes.

Recently, refrigerated cheese has started going to space too, a request by Shannon Walker, a NASA astronaut currently at the station. Dr. Dowdy worked with a Houston cheesemonger to find a Belgian Gouda.

Future food challenges in space will include cooking and growing crops. That will become crucial on longer missions like trips to Mars where there will not be a continual arrival of supply ships. Already, astronauts have grown — and eaten — small harvests of lettuce and radishes grown on the space station.

Using an experimental zero-gravity oven, astronauts in 2019 also baked pouches of raw chocolate cookie dough, producing five cookies in all. The astronauts did not eat the cookies, which were sent back to Earth for safety testing.

But without gravity, ovens cannot work the same way. Other common cooking techniques like sautéing and stir-frying would not only be messy, with ingredients floating all around, but potentially catastrophic if the flames spread out of control. The physics is also different, with heat transmitted through radiation and direct physical contact instead of the flow of hot air like in ovens on Earth.

“I can’t wait to see what sort of innovative solutions we come up with to tackle that challenge,” Dr. Dowdy said.