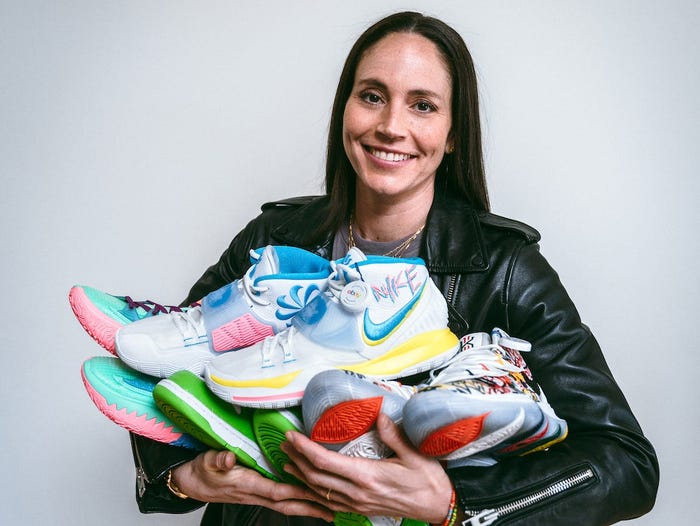 WNBA champion Sue Bird is a major sneaker collector with over 500 pairs.
The four-time Olympic gold medalist has used her platform to encourage female sneakerheads.
Bird partnered with eBay to showcase her collection and explain why she invests in certain pairs.
See more stories on Insider’s business page.

Sue Bird might best be known for winning four WNBA championships and four Olympic gold medals as part of Team USA. But a lesser-known fact is that she also happens to be a massive sneakerhead.

A self-described Nike Dunk lover, Bird estimates her collection totals around 500 pairs, and includes coveted sneakers like the Kyrie 6 “Air Yeezy 2 – Pure Platinum” By You and the Kyrie 6 “Neon Graffitis.” The Seattle Storm guard can often be spotted wearing a pair of Nike Kyrie Irving basketball shoes while on the court.

“Wearing sneakers and having that be a key piece in the clothes I wear and just how I present myself both on and off the court, that’s me just being authentic,” Bird, who is currently in training camp in advance of her 18th season in the WNBA, told Insider in an interview. “That’s me being comfortable. And that’s me being able to showcase what feels good to me.”

To connect with more sneakerheads, Bird partnered with eBay to give the platform an inside look into her unique collection of kicks via an exclusive photo shoot and interview. The campaign, which rolls out this week, includes details on the athlete’s sneaker investment and collection strategy.

eBay recently launched an authentication program for luxury watches and sneakers its the platform, which Bird said was a major reason in her choosing to partner with eBay to highlight her vast collection.

“Authenticity is a big player in this game of sneakers,” Bird said, explaining her passion behind partnering with eBay for the upcoming event. “You don’t want to open the box and feel that disappointment of maybe wasting or losing money. Nobody wants that.”

Bird’s interest with sneakers dates back to when she was 10-years-old. But it wasn’t until she started sharing her collection on social media that she became what she considers a true sneakerhead. She always viewed sneakers as a crucial part of her outfit selection. Plus, as a Nike athlete, Bird has accumulated a vast collection of player exclusives (PE) — pairs that were not released to the public — throughout the years.

“I started posting them on Instagram and kind of sharing with the world this collection,” she said. “And I think that’s when it all kind of came about.”

Over the years, Bird has shown a penchant for activism and equality when it comes to women. She has been vocal about the WNBA receiving the same level of media coverage and corporate sponsors as the NBA. Bird also recently teamed up with her fiancé and US women’s national team soccer star Megan Rapinoe and at least five other female athletes to launch a series of NFTs (non-fungible tokens) to highlight women in sports on May 10, Sportico reported.

The sneaker industry has historically excluded women in hyped drops and at the designer and creator level. Now, as the pendulum shifts, Bird is using her platform and voice to encourage other female sneakerheads to live their passion.

“It is nice to see that people are now starting to see women in this space as having value,” Bird said. “We’re here, we exist, you can’t ignore us anymore.”

Schools Are the Healthiest Place to Eat in America (and…

What is menudo, and why is this stew so controversial in the…

These 6 restaurant chains skyrocketed in growth during the…

This Fast-Growing Ice Cream Company Is Inspired By Soul Food…