Totally here for this.

Though you’re probably still reeling from the release of this month’s coffee-flavored sparkling water and the official U.S. release of Coca-Cola With Coffee, those of you who have been looking for an alcohol-and-coffee mixture will be happy to know that there’s now something new to add onto your shopping list, and trust me, it’s the one that you’ve really been waiting on.

The new Guinness Nitro Cold Brew Coffee is guaranteed to get you that coffee taste you’re yearning for all while getting you a little tipsy, too. Described in a press release as a “coffee-forward beer” by Guinness brand director Nikhil Shah, the new double brew is the perfect iced coffee to add to your lineup of weekly (or daily! We don’t judge!) drinks to enjoy. It is, after all, fiiinally iced coffee season.

Equipped with a rich coffee aroma plus that signature sweet and bitter taste, the latest stout is made using a cold brew coffee extract as well as additional coffee flavors. Though it only has a four percent ABV—which falls in line with typical Guinness varieties, FYI!—this smooth and creamy beverage is enough to make you want to keep coming back for more.

Interested in getting in on the espresso, chocolate, and caramel fun? Guinness Nitro Cold Brew is now available nationwide and comes in four-packs of 14.9-ounce cans or single serve cans for about $8.99 and $3.49 respectively. 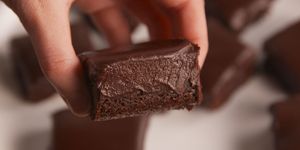 With No Frills or Celebrities, Cookpad Is a Global Go-To for Recipes