Denounced by politicians and reviled by food safety activists, American-bred “chlorinated chickens” have become a symbol of all the U.K. fears about a looming trade deal.

LONDON — In this post-Brexit, mid-pandemic moment in the United Kingdom, with its economy battered by recession and the royal family in mourning and turmoil, it is hard to find a topic that unites this fractious nation. But U.S. chickens — yes, the lowly, clucking farm animal, consumed daily by the millions in all 50 states — have done it.

The odd thing is that U.S. chicken is not sold anywhere in Britain, and if people here get their way, it never will be.

What precisely have U.S. chickens done to so thoroughly appall the British, even though few of the latter have ever sampled the former?

The short answer is that some U.S. chicken carcasses are washed in chlorine, to eliminate potentially harmful pathogens. Americans for years have been devouring these birds without any fuss, but in Britain, U.S. chickens are now attached to the word “chlorinated” the way warning labels are attached to cigarettes — which is to say, always. U.S. chickens have been denounced by editorialists, academics, politicians, farmers and a wide variety of activists. In October, a group of protesters dressed in chicken costumes milled around Parliament.

“Caution Chlorine” was emblazoned, in a hazmat-style font, on the front of their yellow onesies.

U.S. poultry has long been derided in the United Kingdom, but didn’t become an object of public vitriol until it became clear, several years ago, that the two countries would sign a new free-trade agreement once Britain left the European Union. Arguably the largest anticipated sticking point in any such deal centers on U.S. food standards, which are widely regarded here as subpar and tolerant of filth and shabby conditions in the quest for profits.

It’s all a big smear, says the U.S. poultry industry, and an excuse to keep a British industry from competing with far larger American rivals. But dig a little and it’s quickly clear that chlorine chicken phobia is about more than edible birds. Somehow, the American handling of Gallus gallus domesticus, as it’s known to scientists, has become a symbol of British fears that, without the proper guardrails, a trade deal with the United States will change Britain for the worse. 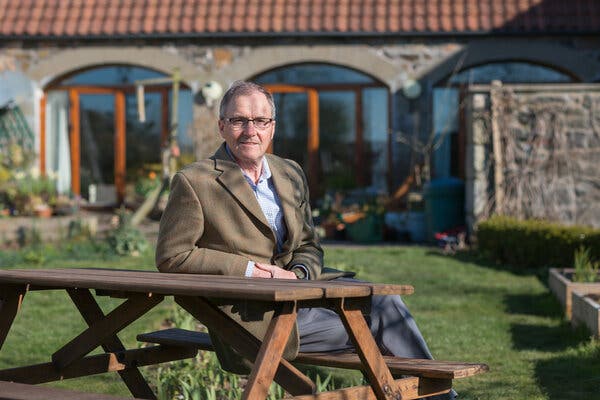 “If we were to address fears about U.S. chicken with evidence-based arguments and expensive publicity campaigns, then something else would arise,” said Ian Boyd, a biology professor.Connor Mollison for The New York Times

“This is a classic example of how belief has overtaken evidence and become embedded in a complex sociopolitical discourse which is almost certainly motivated by something very different from that actual issue,” said Ian Boyd, a professor of biology at the University of St. Andrews. “Chlorine-washed chicken is almost certainly a proxy for much deeper issues concerning trust.”

The specifics of this mistrust are hard to pin down. Most involve a free-floating sense that the United States is a heedless juggernaut and if trade between the two countries — now worth roughly $230 billion a year — is unfettered, there is no telling what Americans will peddle and ruin.

A similar dread was evident in the case articulated by some Brexiteers. The United Kingdom is singular, and wrapping it into a union of 27 other states undermined its uniqueness, went the argument. The word “sovereignty” came up a lot, along with the suggestion that much of it had been lost to the rest of Europe and had to be reclaimed.

Today in On Tech: When is online nastiness illegal?JPMorgan Chase says it ‘misjudged’ fan reaction to the Super League.The opening of a grant program for live-event businesses was pushed back at the last minute.

In a way, “chlorinated chicken” is the new sovereignty, and that is reflected in some of the language used by vocal critics. Like Tim Lang, an emeritus professor of food policy, who said in an interview: “The issue is whether the United Kingdom will become the 51st state of America.”

To some, “chlorinated chicken” is the new sovereignty. “The issue is whether the United Kingdom will become the 51st state of America,” said Prof. Tim Lang, an emeritus professor of food policy.Tom Jamieson for The New York Times

To Professor Lang, the prospect of a U.S. poultry invasion is not just an abstract anxiety about agricultural imperialism. It’s a matter of health and safety. He noted that in the late ’80s and early ’90s, Brits were rattled by a number of high-profile food scares and outbreaks involving salmonella, E. coli and mad cow disease. The Food Standards Agency was created in 2000 with a remit to rethink the country’s processing systems. Around the same time, the European Union adopted what it calls the precautionary principle on food and environmental safety.

“If in doubt,” he wrote in an email, summarizing the principle, “the consumer or eco interest triumph over business. Better to assume there might be a problem than pooh-pooh it only to find there were problems later on.”

He and others say the U.S. food processing approach is to let hygiene slide during feeding, growing and slaughtering, and then make up for lapses at the end with a good disinfectant. It doesn’t work particularly well, critics say. As evidence, Prof. Lang had a colleague forward an article that quoted the U.S. Centers for Disease Control and Prevention, which stated that one in six American suffered from a food-borne illness every year. In the United Kingdom, that figure as tallied by the Food Standards Agency, the article continued, is one in 60.

The chlorine dunk isn’t just kind of gross, in other words. It’s ineffective.

Nonsense, says Tom Super, spokesman for the National Chicken Council, which represents the companies that process about 95 percent of U.S. chicken. He pointed out that the United Kingdom’s Food Standards Agency’s own website offers a caution about comparing food-borne illness numbers between countries.

“The range of study methodologies vary among and within countries,” the site reads. “This makes any comparison and interpretation of differences challenging.”

Mr. Super notes that only 5 percent of chickens are now washed with chlorine because the industry has moved on to a better cleaner. (Peracetic acid, if you’re curious.) But focusing on how chickens are washed misses the safety and care built into the U.S. system, he added, starting with how eggs are hatched and chickens are fed. Lower hygiene standards? A total canard, an excuse for protectionism, he says, and one that glosses over the findings of the European Food Safety Authority, which in 2008 could find no evidence that chlorinated chickens are unsafe.

In 2018, packs of fake “Brexit Selection Freshly Chlorinated Chicken” were used in a protest against Brexit.Tayfun Salci/Anadolu Agency, via Getty Images

“The science is on our side; the data is on our side,” said Mr. Super. “Americans eat about 150 million servings of chicken a day, and virtually all are eaten safely. We’d send the same chicken to the U.K. that we now feed our kids and that we send to 100 countries around the world.”

The timing for any United States-British trade deal is unknown; the Biden administration has said little on the subject. Katherine Tai, the U.S. trade representative, said at her confirmation hearing that she wanted a pact that “prioritizes the interest of America’s workers and supports a strong recovery for our economy.”

Several trade experts said that negotiations could take years, largely because the deal doesn’t seem to be a high priority in the United States. But a long wait might be just what the British need, said Professor Boyd of St. Andrews. Agriculture here has long had a claim on the national psyche that far outweighs its actual economic significance, he explained. Consumers here are more interested in sustaining an institution — farming — than buying slightly cheaper cutlets. And lecturing the British public about studies and test results won’t change that.

“If we were to address fears about U.S. chicken with evidence-based arguments and expensive publicity campaigns, then something else would arise,” Professor Boyd said. “This is a sociopolitical problem which will be resolved through enlightened partnership to build a trading relationship, not by browbeating people with scientific facts.”

David Henig, director of the U.K. Trade Policy Project, which is part of a think tank in Brussels, said trade between the countries will carry on, using terms and agreements that have been in place for years, he said. When the United States is prepared to tackle the thornier issues, the British will be ready.