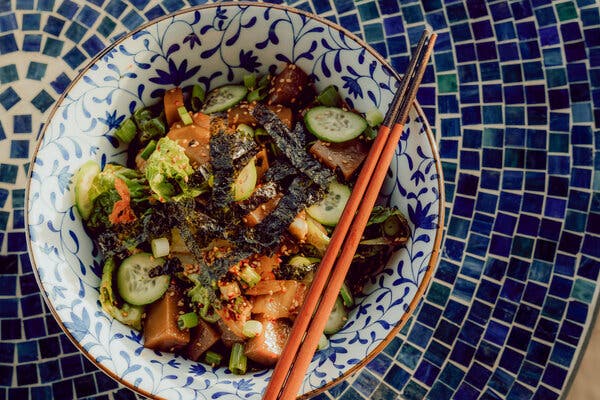 Michelle Zauner, the musician known as Japanese Breakfast, serves her homemade acorn jelly in a light, springtime salad with kimchi, seaweed flakes and a hefty pour of sesame oil.Meghan Marin

During a three-week visit to Seoul in May 2019, the musician Michelle Zauner saw the city in a nostalgic light. She was staying in an apartment in the Gangnam district to complete the first draft of her memoir, “Crying in H Mart,” following a tour in Asia with her solo indie-pop project, Japanese Breakfast. Though Zauner, 32, grew up in Eugene, Ore., she was born in Seoul, and revisiting the food of her childhood — particularly dotorimuk-muchim, or seasoned acorn jelly, which she ordered often from a noodle restaurant near the apartment — caused new emotions to surface. Traditionally made from foraged acorn shells that are dried, ground into a powdery starch, cooked in water and served cold as banchan, or a side dish, its gelatinous texture and earthy flavor triggered a visceral response, first at her fingertips, then on her tongue. “It reminded me of my enduring struggle as a child to keep the slippery bricks between my chopsticks,” Zauner says, adding that the dish is “almost like a Korean aspic, but healthier.”

As with writing, Zauner has found preparing and eating Korean comfort food to be therapeutic in that they also excavate positive memories of her mother, who died from cancer in 2014. “Every time I came back from college, my mom would make the same meal, which was short rib with radish-water kimchi,” she recalls. “She always knew I liked things a certain way. For me, that is very much what love is about: remembering.” Zauner’s music, filled with lyrical vignettes and dreamlike compositions, is another outlet for tempering her grief.

The suddenness of her mother’s sickness left Zauner without a chance to record many family recipes, so much of what she knows about Korean cooking comes from watching instructional videos by the YouTube personality Maangchi, who grew up in Yeosu, South Korea, and lives in New York. “She was this guardian, in a way,” Zauner says, “who helped me remember something positive about my relationship with my mom before it was clouded over with illness.” An update on the Korean-American chef’s original dotorimuk-muchim, Zauner’s version takes the form of a light salad, the recipe for which she shares below, tossed with crisp red-leaf lettuce and sour kimchi drenched in sesame oil. Though you can buy premade jelly, she says it’s “cheaper in the long run and easy enough to make from scratch,” as long as you can find acorn starch at an Asian grocery; naturally, she recommends H Mart.

Zauner, whose book, “Crying In H Mart,” is out this week, on the balcony of her apartment in the Bushwick section of Brooklyn.Meghan Marin“It has a lot of different flavor combinations and textures,” Zauner says of the dish, “which is something that I really like about Korean food.”Meghan Marin

Serves two to three as a side salad, or one as a generous main.

Combine acorn starch, water, salt and sesame oil in a pot over medium-high heat, stirring continuously. The jelly should thicken and transform from a milky coffee color to a dark caramel.

After 10 minutes, remove from heat, cover, and let the pot sit for five minutes. Pour the acorn jelly into a glass Tupperware a few inches deep. Leave uncovered on the counter to cool for 20 minutes before storing in the fridge to set overnight.

Before serving, combine the dressing ingredients together in a small bowl and prepare the vegetables.

Now that the jelly has set, flip the Tupperware upside down onto a cutting board to release it. If it gives you any trouble, you can help it along by either shaking it loose or gently running a knife along the corners.

Cut the jelly into roughly one-inch cubes and dress in a large bowl. Add the rest of the salad ingredients and toss. Garnish with seaweed strips.