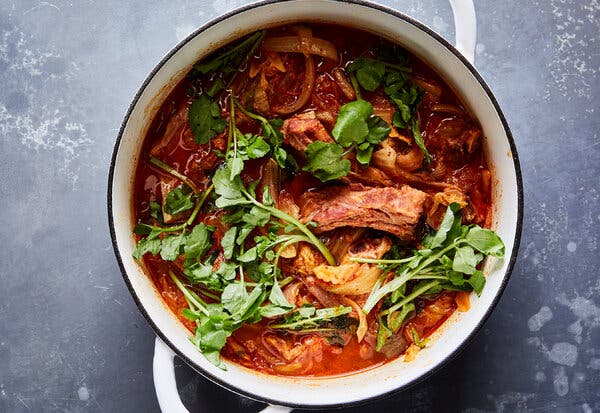 During a temporary move back home, the author picked up some important tips for making his mother’s signature kimchi jjigae.Linda Xiao for The New York Times. Food Stylist: Rebecca Jurkevich.

Let the record show that I make a terrible roommate. I can still hear my mother’s voice as she encountered the sink full of dishes, the counter spilling over with spices and syrups: “I can’t live like this!”

About nine months ago, I moved back home to Atlanta to write a cookbook with my mother, Jean. A couch-surfing freeloader, I was only supposed to be there for a couple of months to work on the kimchi chapter, a selection of heirloom recipes I would never have been able to develop over the phone from New York, where I live now. But as each month passed, I found more and more excuses to stay.

By cooking with Jean in such a structured, quotidian way, I was able to stop time, a compelling state for an anxious mind like mine. I could finally slow down and ask her questions about the foods we ate when I was growing up. What I didn’t know was that I was entering a master class in Korean home cooking.

All my life, I thought I knew how my mother cooked, because she had done it for my brother and me every day, breakfast, lunch and dinner. And I had watched. But there were so many details I missed, like how, when making her signature kimchi jjigae, she blanches the pork ribs first with fresh ginger to remove any gaminess. Or how she always blooms gochugaru in a little fat before starting red pepper-based stews. Or how she adds a small handful of pine nuts to her baechu kimchi, because that’s what her mother did. (I wish I could interview my grandmother and ask her why she did that.)

In 2004, in this very newspaper, the columnist and cookbook author Nigella Lawson wrote, “Quite often you cook something the way your mother did before you.” Describing an allegory that has since been dubbed the Pot Roast Principle — in which a cook cuts the ends off a roast because her mother does it, who does it because her mother does it (the punchline being that the grandmother only does it because, depending on the telling, her pot or her oven is too small) — Ms. Lawson discussed the way children of cooks straddle wanting to honor tradition and, as sentient beings, wanting to carefully tinker. 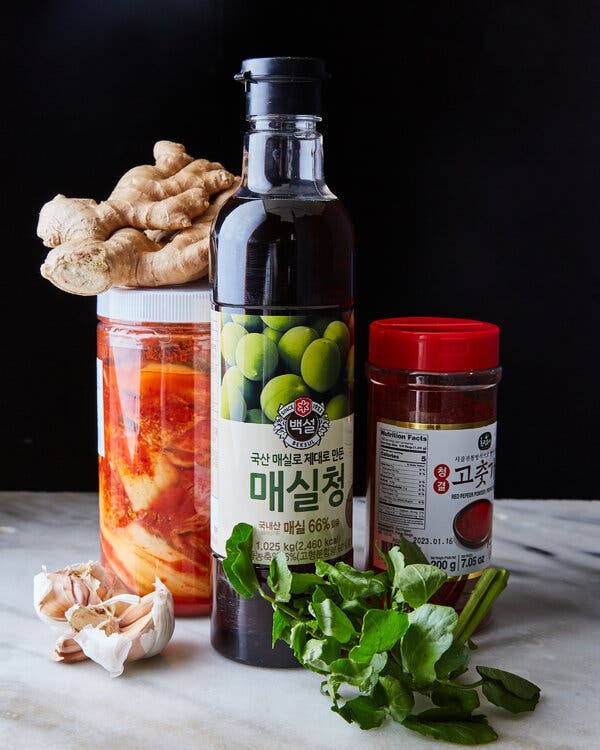 “So we credit recipes with much more authority than they necessarily deserve,” she wrote. “It might be better to regard them really as more of an account of a way of cooking a dish rather than a do-this-or-die barrage of instructions.”

At first, I treated some of Jean’s culinary quirks as accounts rather than barrages. I gave her a hard time about cooking with maesil cheong, a Korean green plum syrup (often labeled an extract), to lend sweetness to her savory dishes. I told her that if more readily available sweeteners can be used, we should use them. But maesil cheong is a main ingredient in her kimchi recipe and not infrequently finds its way into her jjigaes as well. When we tried certain recipes with, say, granulated sugar in place of the idiosyncratically tart, fruity syrup, she’d take a bite and say, “It’s not the same.” And she was right. It wasn’t the same.

As I watched my mother cook and move and breathe in her own kitchen, I realized that maesil cheong is an essential ingredient to her in the same way maple syrup and dark brown sugar are to me. So I started to bend.

But even then, I had questions. I wanted to tinker.

Eric Kim with his mother, Jean, in Atlanta in the early 1990s.Eric Kim

Growing up in Georgia, after long days at the swimming pool, my brother and I often came home to Jean’s kimchi jjigae, a bubbling, cauldron-hot stew of extra-fermented kimchi and other bits and bobs from the refrigerator. We usually had it with Spam, pork belly or tofu, but my favorite was when she stewed ribs in that gochugaru-flecked lagoon. But I wouldn’t, for instance, inherently think to blanch those ribs. Wouldn’t you lose some of the pork flavor, not to mention the glorious fat, that would be better pooled in the stew instead of in the sink?

Sure, she explained. But the resultant broth will taste much less clean, and the kimchi will be overcooked by the time you get the pork tender enough. “Anyway,” she told me, “the point of kimchi jjigae is the kimchi.”

Unsatisfied, I pressed her again. “So why do you add pine nuts to your kimchi?” She thought hard and finally came up with her own response, one that wasn’t, “Because that’s how my mother did it.”

“The pine nuts are surprises for future you,” she said. “When you bite into one, it releases a Sprite-like freshness.” According to Jean, it’s the little things that find you later.

For a streamlined bibimbap, roast a melange of vegetables on one sheet pan as rice heats and eggs oven-fry on another.Linda Xiao for The New York Times Food Stylist: Judy Kim.

During my time in Atlanta, I was in charge of dinner. One night after work, I only had a few minutes to get food on the table, so I opened the fridge: sad vegetables, all languishing in the crisper drawer. Bibimbap, or mixed rice, came to mind. So I took a sheet pan and arranged the sad vegetables on it to roast in a hot oven. The sad vegetables were no longer sad. I realized I could also reheat leftover white rice and bake a handful of eggs on a second sheet pan, the way my editor Genevieve Ko does.

As dinner took care of itself in the oven, I poured myself a cold beer and waited patiently with empty bowls to be filled with the rice, eggs and roasted vegetables, each portion dabbed with gochujang for savory heat and dribbled with toasted sesame oil for nuttiness.

When Jean took a bite of my sheet-pan bibimbap, she said, “I’m never doing it the other way again.”

On the last day, the morning before I drove back to New York, I noticed that my mother had left on my bed a tray of gyeranbap, or egg rice, with kimchi and a mug of burdock-root tea. I would miss these little deliveries we made each other, two introverted roommates leaving behind treats like anonymous neighbors. I usually left her late-night recipe tests with a note: TASTE. Or toasted slices of milk bread. Once, she left me a mojito at three in the afternoon.

When I brought the empty tray downstairs, I saw that she had finally cleared the counters of all my spices, equipment and sheet pans. “Oh, this is what the kitchen looks like,” I joked.

For weeks, I dreaded this moment, the leave-taking. But it came and went, as things do. I packed the car, hugged my mom goodbye and drove off, promising to visit again in a few months.

Back in my New York apartment, I made a batch of her kimchi. I sprinkled in some pine nuts, thinking of what she had said, how the little things are what find you later. When the jar of kimchi fermented, weeks later, I turned it into kimchi jjigae, first blanching the ribs like she did and blooming the gochugaru in butter. That first bite was clean, the disparate parts alloying like copper and tin, and I had totally forgotten about the pine nuts until I bit into one. It surprised me with its Sprite-like freshness.

I picked up the phone and called her.