6 workers in the battered hospitality industry reveal just how bad it is right now, from not having time to use the bathroom to fears of getting replaced by cheaper labor 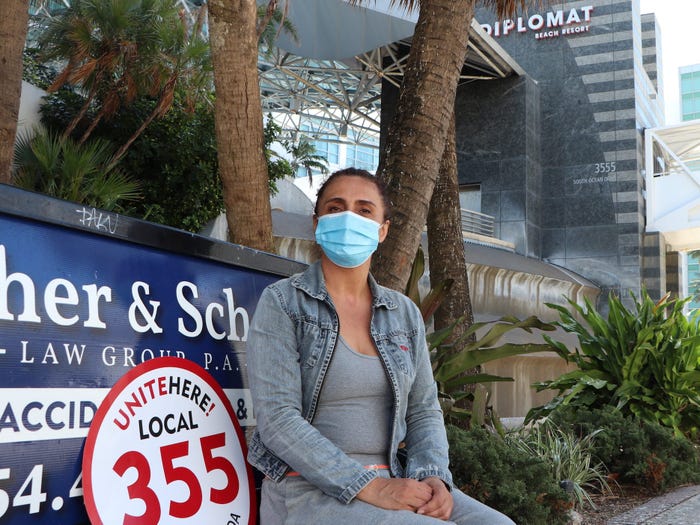 Mirela Ivan worked as a server at the Diplomat Beach Resort in Hollywood, Florida, for 13 years before she was laid off at the beginning of the pandemic.

Hotel employees are worried about working conditions amid the pandemic.
Many say their jobs have gotten harder because of lower staffing levels.
Others have yet to return to work after being laid off last spring.
See more stories on Insider’s business page.

A year into the pandemic, workers in the battered hospitality industry know tourists are returning, and they’re worried.

The American Hotel & Lodging Association reported that about 3.5 million leisure and hospitality jobs — about 20% of total jobs in the sector — disappeared during the pandemic and have not yet returned.

Now, as US vaccinations accelerate and the CDC relaxes guidance around domestic travel for vaccinated Americans, some industry workers are worried that they may be left behind as travel makes its roaring comeback.

At one point during the pandemic, 98% of the members of Unite Here, one of the largest unions in the US, were out of work. Unite Here represents about 300,000 workers in the hotel, gaming, food services, distribution, transportation, airport, textile, and laundry industries.

Insider spoke with six workers in the US hospitality industry, including two who have returned to work. But others fear they won’t be going back anytime soon, as union-mandated job protections are set to expire and competition for existing hospitality jobs is fierce.

More work and fewer people to do it

Rosa Leon has worked as a housekeeper at the Hilton Americas-Houston for 17 years. Leon was furloughed for two months at the beginning of the pandemic.

Since returning to her job, her workload has increased dramatically — so much so that she said she does not drink water on the job because she rarely has the time to use the bathroom.

Before the pandemic, there were about 80 housekeepers on staff. Now, there are only 10 working in the hotel, Leon said.

The hotel, like many others during COVID-19, adjusted its policies so that cleanings are done less frequently, since consumers may not want a housekeeper to enter their room on a daily basis during the pandemic.

But, Leon said, this change in policy has created more work for housekeepers because rooms are in a much worse condition when the time comes to clean them at the end of guests’ stays.

Whereas before the pandemic it would take her between 25 and 30 minutes to clean a room, it now takes Leon about an hour for each, she said.

“I don’t think there’s anyone out there who has a body that could withstand cleaning this many checkout rooms that are this much dirtier than they used to be,” she continued. 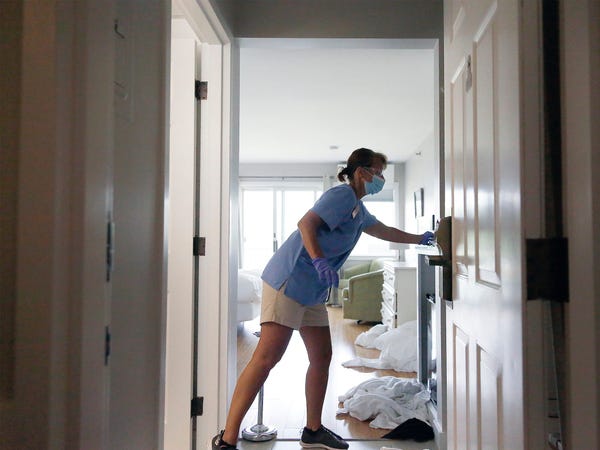 A housekeeper cleans a room during the COVID-19 pandemic.

A spokesperson for Hilton Americas-Houston said the hotel’s management aimed to “provide a safe, clean, and hospitable environment for all who enter” the hotel.

“Along with the safety of our guests and team members, the cleanliness of our hotel is of the utmost importance and is always a focal point of our operations,” the spokesperson said.

Carolyn Ford, a housekeeper at IP Casino Resort in Biloxi, Mississippi, for the past 18 years, was also furloughed at the onset of the pandemic, but she returned to work in May. A couple of weeks later, she tested positive for COVID-19. Guests are still required to wear face coverings in the resort’s public spaces, but Ford said they often don’t.

“They’ll come up to your cart without a mask on,” Ford said. “It’s not safe.”

Ford said that she enjoyed her job before the pandemic, when IP Casino Resort employed about 75 housekeepers, but recent conditions and the staff downsizing to 20 housekeepers have made her feel unsafe at work. She is also frequently cleaning rooms on four or five floors rather than just one, which adds physical strain and time to her workday.

Leon and Ford both said they wished hotel guests would ask for their rooms to be cleaned daily.

“These changes are bad for both guests and workers, threatening to eliminate as many as 180,000 jobs held primarily by women of color and creating unsafe workloads for housekeepers left to clean dirty rooms that haven’t been sanitized in days,” said D. Taylor, the president of Unite Here. “If we want to win back guest confidence and get on the road to recovery for all, hotels must continue daily room cleaning as a guest standard.”

Boyd Gaming, which owns and operates IP Casino Resort, did not return Insider’s request for comment.

Working in a hotel has become more challenging for employees during the pandemic, yet tens of thousands of others are still waiting to be called back.

The US March jobs report provided a glimmer of hope for the hospitality industry, as the sector added 280,000 new jobs, more than any other industry.

But the question of who exactly is filling these roles has become a point of contention for workers.

In many cities around the US, employers who conduct layoffs are required by union contracts or local ordinances to first offer laid-off workers available jobs they are qualified for, before interviewing other candidates. These “recall rights” typically last for a year. And if no action is taken, they are set to expire soon for many hospitality workers.

Mirela Ivan worked as a server at the Diplomat Beach Resort in Hollywood, Florida, for 13 years before she was laid off at the beginning of the pandemic. Hotels in the Miami area are starting to reopen, and some properties said they can’t find enough workers to meet surging travel demand.

But the Diplomat remains closed. The unionized workers’ recall rights are expiring on May 31, and Ivan is worried the hotel won’t open in time. She is concerned about being replaced with new workers earning lower wages, saying the situation turns experienced workers into “a target.”

“It comes down to cost, to how much we cost,” she said. “And to be honest with you, it really hurts.”

“I spent New Years, and Christmases, and Thanksgivings, and Mother’s Days, and birthdays. We put there, on that property, our hearts and souls because we care, and that’s loyalty.”

A spokesperson for Brookfield Properties, which owns and operates the Diplomat, said the company does not yet know when it will be able to reopen the hotel. They added that the company is working with the union and plans to rehire laid-off workers.

“Unlike smaller, tourist-supported hotels, group hotels like the Diplomat cannot function without conventions and events operating at full or near-full capacity,” the spokesperson said. “It is an unfortunate reality for the Diplomat community and its workforce, as well as all of the local restaurants and businesses that rely on conventions and the people they bring.”

Unite Here is waging battles in states and cities across the US over recall rights. In cities such as Minneapolis, Los Angeles, and Philadelphia, new local ordinances are requiring that hospitality workers who were laid off because of the pandemic get a first chance at new jobs, irrespective of what union contracts say. But in other places, including Miami and Boston, the union is still fighting to have these rights extended.

Barbie Tivas worked as a banquet server at Green Valley Ranch outside of Las Vegas for 14 years before she was laid off in March 2020. Since then, she has been living on unemployment while she applies to new jobs, but opportunities are few and far between. Her home is also in forbearance. 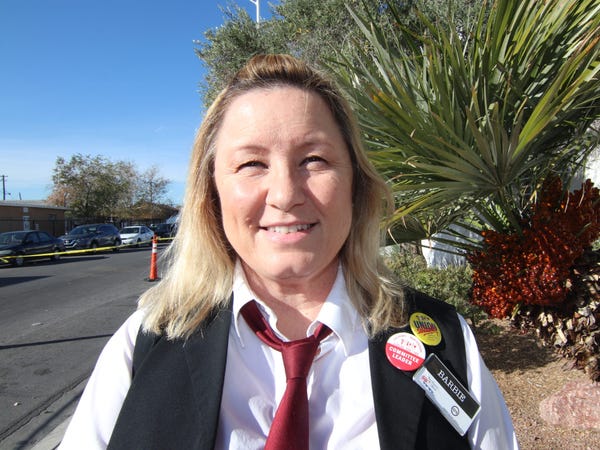 Barbie Tivas is a banquet server with the Culinary Union in Las Vegas. In March 2020, she was laid off from her job at Green Valley Ranch, whose workers are not unionized.

Nevada represents a key battleground for recall rights. While most recent legislation around recall rights has happened at a local level, a state bill under consideration in Nevada would give hospitality workers the right to get their old jobs back, regardless of whether they are unionized.

Green Valley Ranch’s workers are not unionized, so Tivas does not have recourse to return to her former job otherwise. Green Valley Ranch has resumed events, but it’s relying on a slimmed-down staff.

“I thought they had my back because for 14 years I had their back,” she said. “I’ve worked in 114-degree summers out here, catering weddings in the hottest of heat, serving Seder dinners in the rain. We as workers have given our all to the company to help them get to where they are, and they forgot about us. They kicked us to the curb like we were a worn pair of shoes.”

Tivas felt that the company used the pandemic as cover to hire less experienced workers.

The issue of relying on lower-paid workers is one reason that guaranteeing recall rights is so important to Unite Here, Taylor said.

“We had seen before where companies take advantage of then having a new crop of workers at a much lower rate, which puts a burden on those workers and their livelihoods, but also on the community at large,” Taylor added.

Public documents filed by Station Casinos, Green Valley Ranch’s parent company, in January 2020 showed that the company had 15,000 workers before the pandemic.

A Station Casinos spokesperson said the company has brought back more than 2,000 workers who were laid off because of the pandemic, and that all who returned kept their seniority, benefits, and pay rate. The spokesperson said that some workers’ benefits and wages have improved since employees returned to work.

All of the workers who spoke with Insider continued to worry about the threat of the virus and were eager to see their employers keep protections in place as travel resumes in a meaningful way.

Most of all, though, they wanted to get their livelihoods back.

“I want to go back to work so bad,” Tivas said. “I’m just trying my best to look to the future.”

Are you a hospitality worker with a story to share? Contact this reporter at mstone@insider.com or on the secure messaging app Signal at (646) 889-2143 using a non-work phone.

Get Ready for the Bingfen Boom

Your guide to some of the world’s most popular…

All The Mind-Blowing Starbucks Frappuccino Flavors From…

In the Virgin Islands, Fungi Tells a Story