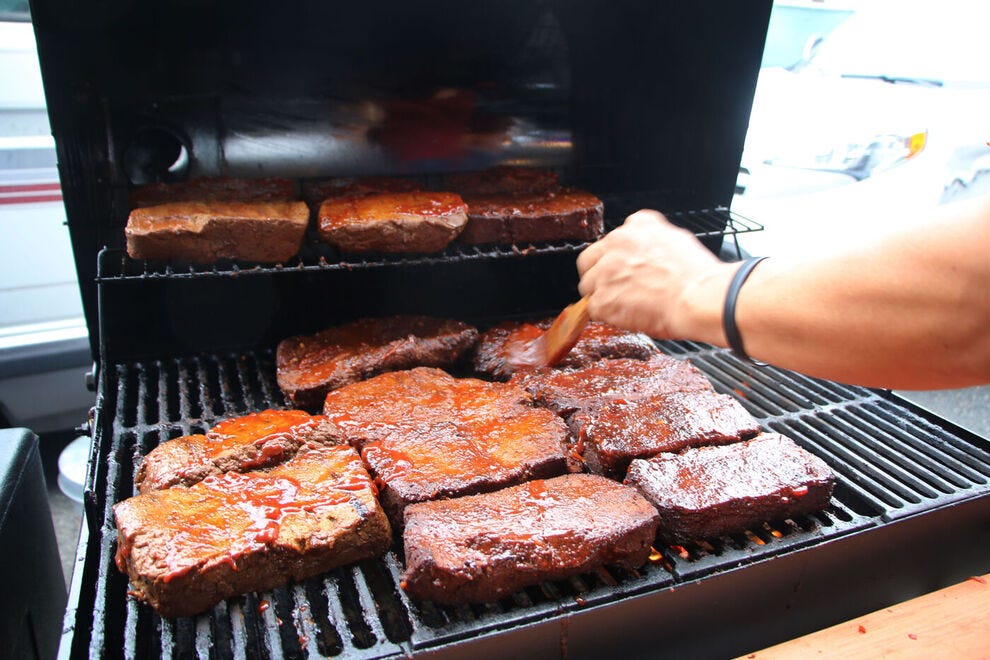 Vegan barbecue may seem like a contradiction in terms. Most people associate summer BBQ with meat sizzling on the grill, but what truly makes a barbecue meal so delicious are the sauces, spices and smoky preparations. Also, it’s the little indefinable magic that happens when a chef transforms ingredients into a delectable masterpiece.

If you’ve ever eaten at any of our top choices for BBQ restaurants in the United States, you know that vegan-style BBQ can be every bit as delicious as meat-based BBQ. Whether you’re a vegan or omnivore, you’ll find some tasty barbecue dishes at these dynamic eateries. 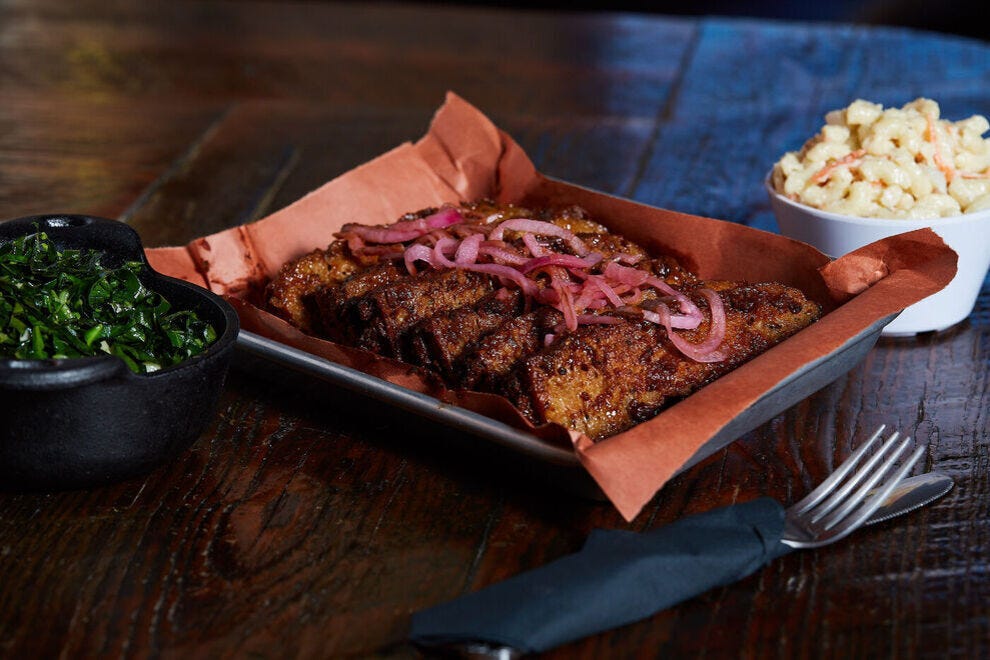 Executive Chef Chris Kim and his partner (in life and business) Rebecca Lopez-Howes aim to make vegan food less intimidating to newcomers. Some of their BBQ dishes include BBQ seitan sandwiches and salads. 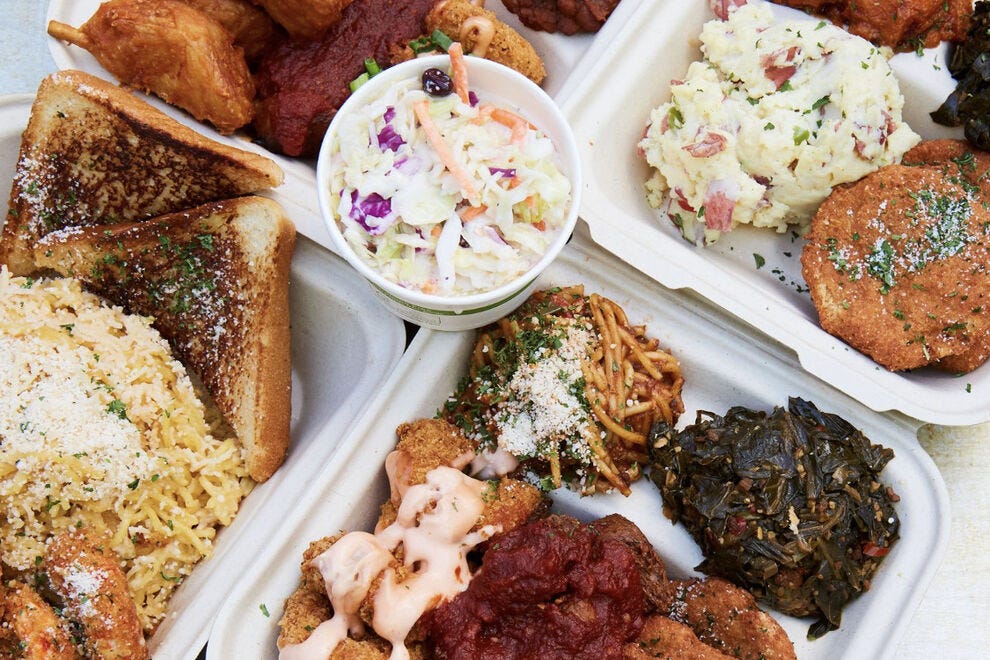 Located in Oakland, California, Vegan Mob serves vegan BBQ and soul food. One of their much-loved dishes is the “barbequito” which is a tortilla that’s stuffed with vegan brisket, Mob sauce, macaroni, barbecue baked beans, slaw and guacamole. The barbecue seasoned fries are also a big hit.

Executive chef, CEO and founder Toriano Gordon loves bringing all his dishes to life in a plant-based form, and that passion shows in all of the tasty menu items. 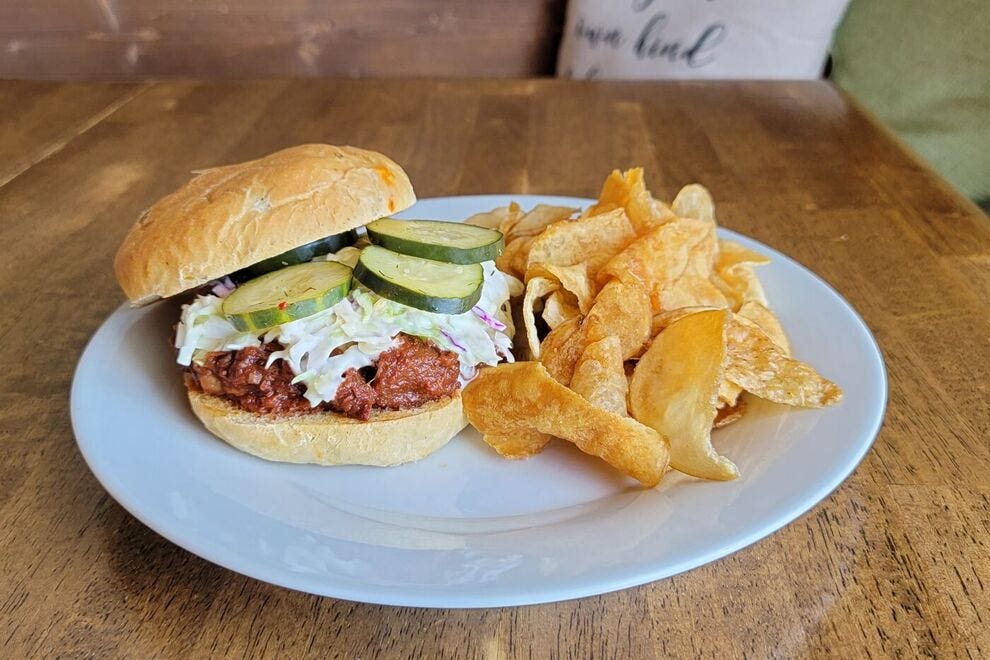 The Acre’s BBQ jackfruit — Photo courtesy of The Acre

Since barbecue is such a quintessential American dish, Shawn Weed, the chef and owner of The Acre, decided to serve western-style BBQ. It’s slowly crafted with fresh ingredients, a touch of Tennessee whiskey and lots of love. A dish that’s very popular at The Acre is the BBQ jackfruit that is served on a sandwich or as part of a combo plate. 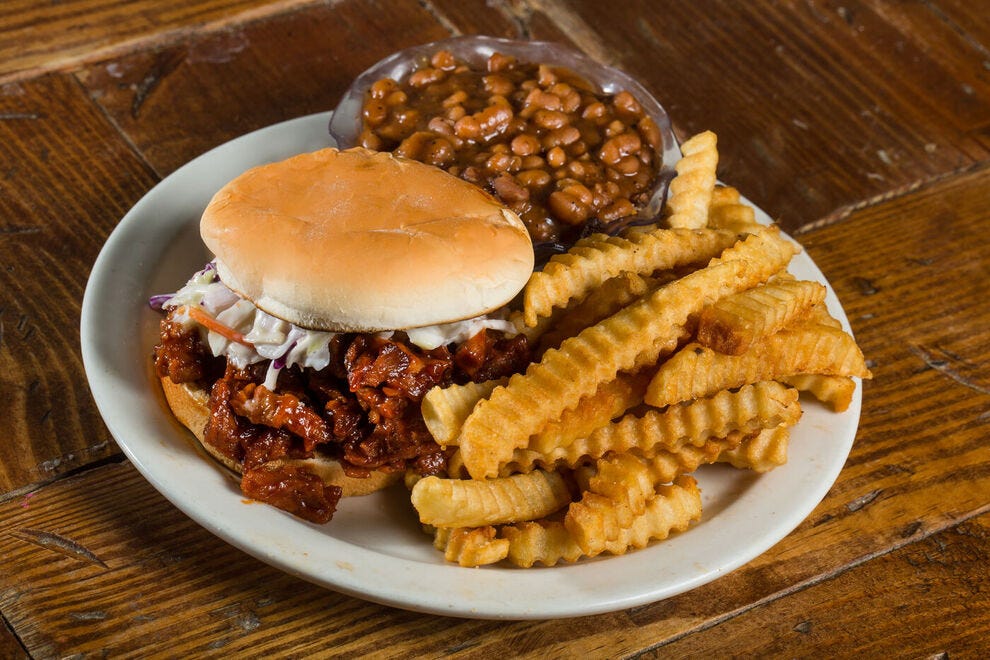 The Imagine Vegan Cafe is smack dab in the middle of BBQ country in Memphis, where a sandwich platter is a staple. Their mouthwatering BBQ is the perfect alternative to pork, with all the southern comfort and goodness you could want.

As its name suggests, everything is vegan here, and this BBQ is made from wheat and soy-based “meat” with a hearty texture, topped by a zesty rich sauce. It’s served with creamy coleslaw, baked beans and fries. They also serve vegan BBQ nachos. 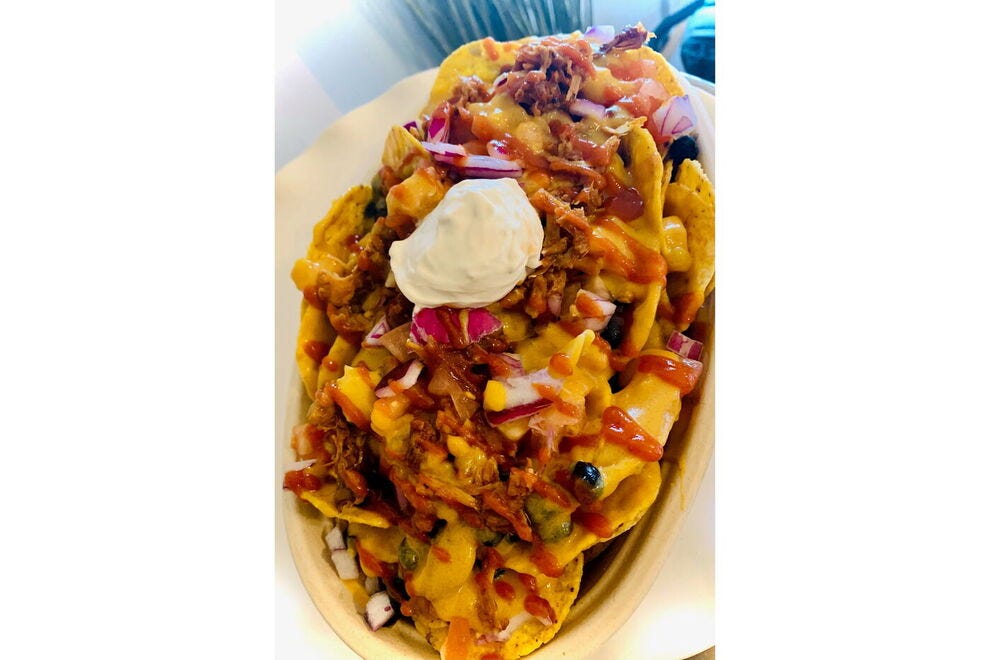 Clifton and Tiffany Hancock, the owners of Southern V, say that it would be blasphemous not to have BBQ on their menu given the name of their restaurant. After all, BBQ is in the top ten of most lists of Southern “comfort foods.”

Some of the beloved BBQ dishes you can find at this feel-good eatery include the BBQ jackfruit sandwich and BBQ jackfruit nachos. 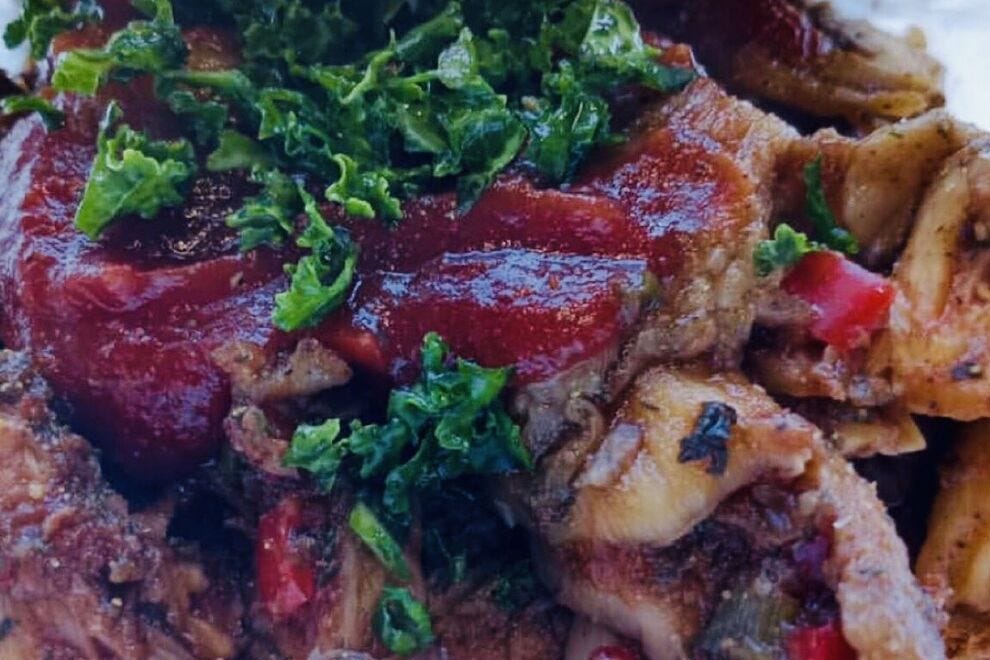 Chef Eddie Augusta owns and runs the Vegan Time Food Truck in Mobile, Alabama. He’s a pioneer in plant-based cuisine in the Azalea City. Once you’ve tried their vegan sautéed barbecue oyster mushrooms, you’ll start planning your next trip back for more. They also serve a scrumptious vegan barbecue pizza. Their alkaline barbecue sauce is made from scratch. 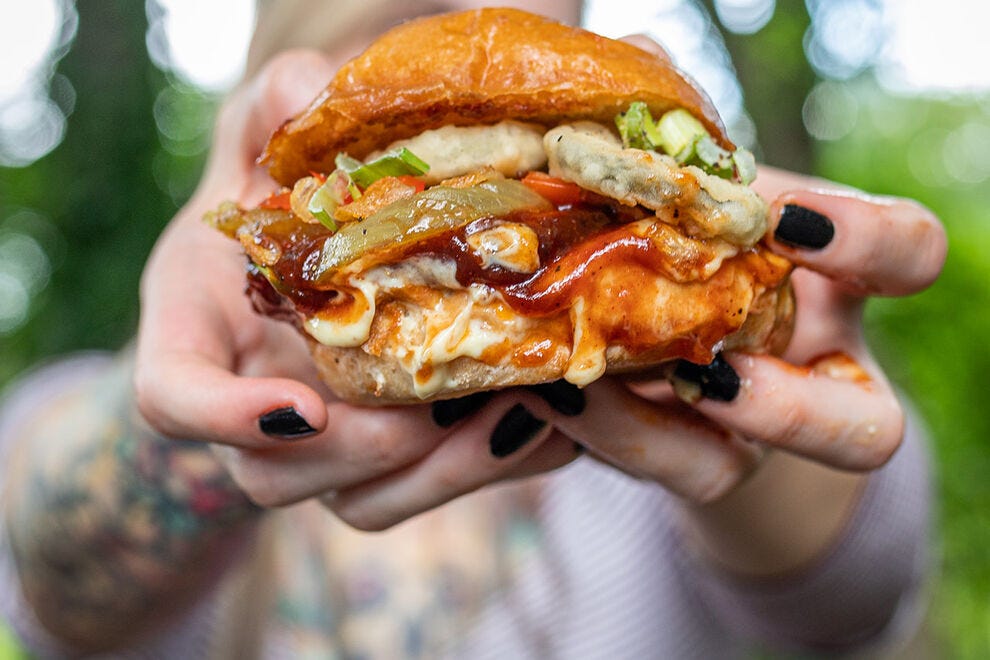 “People have a misconception of what barbecue really is. Barbecue is a technique using live fire and smoke to cook the food. We are applying these same methods and techniques to bring the best plant-based vegan BBQ in the world,” explains chef Terry Sargent.

His Grass VBQ restaurant started off as a pop-up, then it was established as a restaurant in 2019. He uses the term VBQ to refer to vegan BBQ. His signature house-made smoked “veef” brisket is cooked with VBQ sauce. 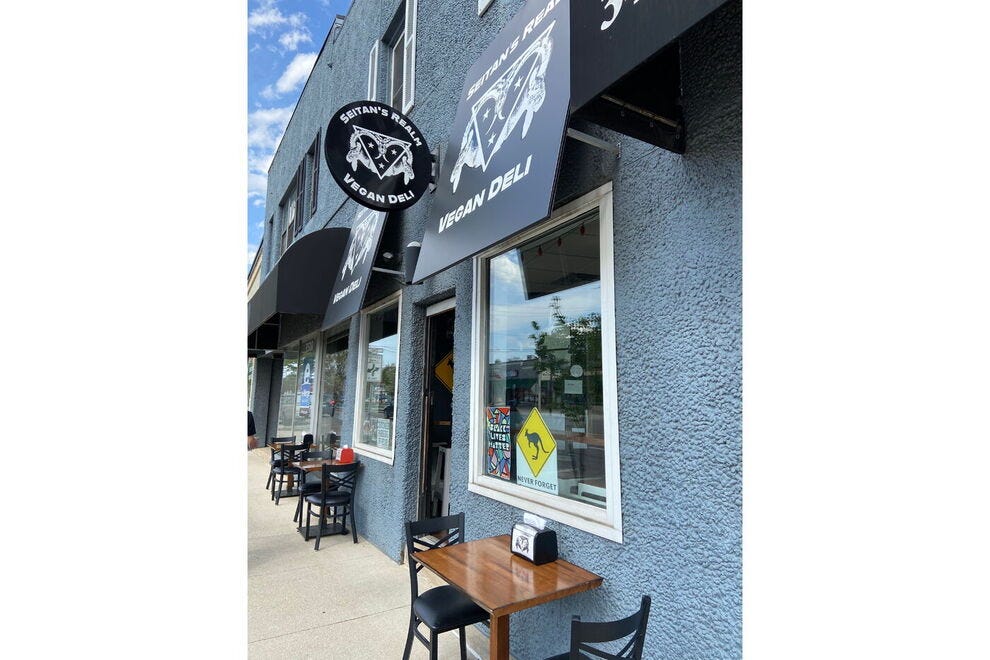 Columbus has a vibrant vegan food scene, and Seitan’s Realm is a fun place to enjoy BBQ. Its signature barbecue dish is the Notorious B.B.Q. This dish consists of their hand-shredded smoked “porq” that’s topped with house-made BBQ sauce. It comes with coleslaw and mac and cheeze. Served on a sesame seed bun, it’s a crowd-pleaser.

Shawn DeLeo set out to serve delicious vegan comfort foods to communities who don’t have it available. He once toured the United States with his comfort food and has served vegan BBQ in 32 states.

At DeLeo’s La Jolla restaurant Southern Fried Vegan, his smoky and spiced BBQ is delectably unique with layers of flavor. The BBQ plate and the Beer-Cheeze Battered Beyond Burger are among the most popular dishes.

The Homegrown Smoker has been serving vegan BBQ since 2009. Its menu boasts BBQ beans, which consists of white beans simmered in the restaurant’s house-made BBQ sauce along with garlic, onions and spices.

The Macnocheeto main dish features smoked soy curls that are grilled with peppers and onions. It’s wrapped in a grilled tortilla with macnocheese, BBQ beans and the eatery’s house-made BBQ sauce. 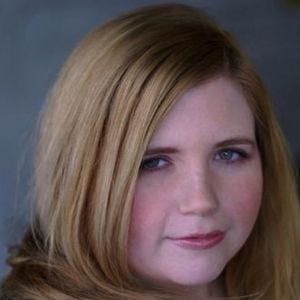 Robin Raven is a journalist who covers such topics as travel and vegan dining.  Her work can be seen in The Washington Post, Reader’s Digest, Grok Nation, Paste Magazine, and many other publications. Robin is also the author of Santa’s First Vegan Christmas, and she is currently working on her memoir.

America In December 2021: See The Best Places To Visit And…