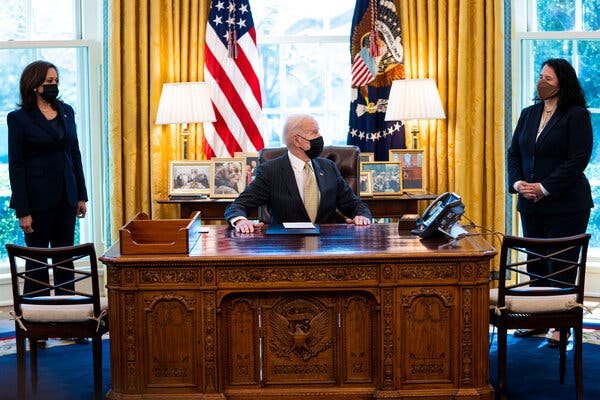 The federal government is preparing to open two new industry-specific small-business relief programs, one of them months in the works, as its signature pandemic aid effort, the Paycheck Protection Program, nears its end.

The Small Business Administration said it hopes to start taking applications by the end of this week for a $16 billion grant fund for live-event businesses like theaters and music clubs. The program, the Shuttered Venue Operators Grant, was supposed to begin nearly two weeks ago, but its application system malfunctioned and collapsed, stymieing thousands of desperate businesses that have been waiting months for the promised aid.

On Saturday, the agency posted additional details on its forthcoming Restaurant Revitalization Fund, a $28.6 billion support program for bars, restaurants and food trucks whose sales were devastated by the shutdowns that states imposed in response to the pandemic. The fund was created as part of last month’s $1.9 trillion economic support package. Within the next two weeks, it will begin a seven-day test intended to help the agency avoid the kind of technical fiasco that plagued the venue program.

The agency has not announced a specific start date for either grant program.

“Help is here,” Isabella Casillas Guzman, the agency’s administrator, said of the restaurant program. “We’re rolling out this program to make sure that these businesses can meet payroll, purchase supplies and get what they need in place to transition to today’s Covid-restricted marketplace.”

Both programs offer recipients grants of up to $10 million to replace a portion of their lost sales. But both programs — which will distribute money on a first-come-first-served basis, subject to some priority rules — are expected to run out of money quickly. The money in the restaurant fund, in particular, falls far short of its needs, agency officials have acknowledged.

“Everyone should apply on Day 1,” Patrick Kelley, the head of the agency’s Office of Capital Access, told attendees at a webinar last week organized by the Independent Restaurant Coalition. Lawmakers projected at least $120 billion in demand for the restaurant fund, Mr. Kelley said, but provided money for less than a quarter of that amount.

The law creating the restaurant fund required a 21-day exclusive period for businesses that are majority-owned by women, veterans or socially disadvantaged individuals. The S.B.A. said that group includes those who are Black and Hispanic, as well as Native Americans, Asian-Pacific Americans and South Asian Americans.

That period alone will almost certainly exhaust the restaurant fund. Applicants will be asked to self-certify their eligibility for the priority period, the Small Business Administration said.

Participants in the fund’s seven-day pilot period will be picked randomly from current Paycheck Protection Program borrowers who meet the priority period criteria, the agency said. They will help test the system but will not receive grant money until the application system opens publicly.

The S.B.A. has offered few details on the technical meltdown that demolished its application system for the live-events grant program. On the day it was supposed to open, frustrated applicants spent more than four hours reloading a broken site before the agency shut it down. No applications were accepted.

“After our vendors fixed the root cause of the initial tech issues, more in-depth risk analysis and stress tests identified other issues that impact application performance,” Andrea Roebker, an agency spokeswoman, said on Friday. “The vendors are quickly addressing and mitigating them and working tirelessly with our team so the application portal can reopen A.S.A.P. and we can deliver this critical aid.”

A spokeswoman for Salesforce.com, whose technology underpins the system, said the company “worked with S.B.A. to resolve initial technical issues, and we’re continuing our work together to enhance the site’s performance.”

The restaurant fund is run by a different part of the agency and uses a separate technology system than the shuttered venue program. After waiting nearly four months for that program to start, industry businesses can’t hold out much longer, said Audrey Fix Schaefer, a spokeswoman for National Independent Venue Association, a trade group.

“Landlords can’t last forever. Eviction notices are coming. People are saying, ‘We can’t do this anymore,’” she said.

The Paycheck Protection Program, created just weeks after the pandemic took hold, has made $762 billion in forgivable loans to millions of businesses over the last year.

It is scheduled to end May 31, but it appears likely to exhaust its funding before that. As of the middle of last week, the program had $44 billion left, an S.B.A. spokesman said.

This Lazy Susan Will Make Taco Tuesday Your Favorite Night…