The Sandwich Economics of the Masters and Augusta National 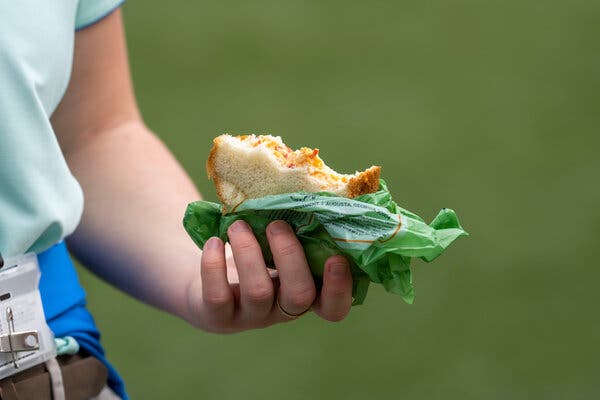 The pimento cheese sandwich has long been a staple food at the Masters.Doug Mills/The New York Times

By Alan Blinder and Kevin Draper

AUGUSTA, Ga. — José María Olazábal hit a tee shot at Augusta National Golf Club’s 12th hole one day this week, jokingly bowed to the spectators and meandered toward the green of one of the great holes in golf.

Much of the gallery swiftly headed toward one of the great bargains in sports: the Amen Corner concession stand, where fans at the Masters can come by a meal — sandwich, soft drink and a cookie — for as little as $5.

The famously controlling club has spent decades accepting that it cannot, in fact, control the weather. But economic forces surrounding the tournament are well within reason, and so the price of a pimento cheese sandwich has stood at $1.50 since 2003. Adjusted for inflation, and assuming the sandwich was appropriately priced to begin with, it should be about $2.14.

Economists believe the enduring bargain, at odds with an era of sticker-shock prices at many athletic events, is not merely a matter of Southern hospitality. Instead, they see hard-nosed, soft-power genius: a thrifty way to cultivate the mystique that has helped make the Masters brand one of the most valuable in sports.

“They want to take you back to the days of Bobby Jones — the good old days, if you will,” said John A. List, a professor of economics at the University of Chicago, referring to Augusta National’s co-founder. “They haven’t followed prices, and they’re understanding that their real bottom line is over years. I think they purposefully don’t follow inflation and economics, and that makes the message even stronger.”

“Economically,” said List, who attended the Masters in 2019, “I actually thought it was brilliant.” 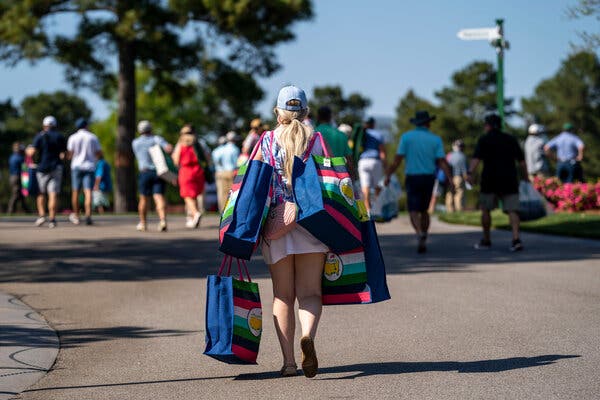 While Augusta National may be the most celebrated site of cheap concessions, it also may offer broader lessons for the sports industry. Georgia, with its moderate cost of living and high-wattage sporting events, has emerged as something of a case study. About 145 miles to the west, the Atlanta Falcons cut prices in half a few years ago when they moved into Mercedes-Benz Stadium. The franchise, cognizant that most of the money in the N.F.L. flows from media rights agreements and ticket sales, basked in positive news coverage and, ultimately, more spending by fans.

The concept has slowly spread throughout sports. The Baltimore Ravens, San Francisco 49ers and Charlotte Hornets, among other professional teams, have rolled out their own so-called fan-friendly concession pricing initiatives, which have helped draw spectators into stadiums earlier and encouraged others to attend in the first place.

At Augusta National, trimming the cost of a pimento cheese by 50 cents, to $1, would be a throwback to the presidency of George Bush — the first one. The club, which wraps its sandwiches in green packaging that blends in with the course, is unlikely to go in the other direction and sharply raise prices, which would mean abandoning the strategy it has long cloaked in the language of gentility and wholesomeness.

“We want the experience to not only be the best but to be affordable,” Billy Payne, who spent 11 years as the club’s chairman, said in 2007. “We take certain things very, very seriously — like the cost of a pimento cheese sandwich is just as important as how high the second cut is going to be.”

Ridley said the low cost “just sort of adds to the feeling” for the sandwiches, though he declined to identify which one he prefers. (“I like them all but try to stay away.”)

People, of course, would still eat. But the prospect of higher profit margins, List suggested, is almost certainly beside the point in the minds of Augusta National's green-jacketed members, who are often titans of business or politics. Whatever quarters are left on the table represent an investment of sorts, experts said, while also aligning well with the ethos of the club and the state.

“They want to shock and awe you on the low side, and they could double, triple or quadruple the prices,” List said as he headed to a Chicago White Sox game this week. “I would have noticed and thought that’s kind of normal. And I don’t think the Masters wants to do anything common.”

Exactly how much money runs through Augusta National is unclear, a multimillion-dollar mystery that satisfies a tradition of privacy at a club that has long faced accusations of racism and sexism.

Augusta National does not say how many tickets it sells for $75 for practice rounds or $115 for competition days, or how much it makes from the decidedly-not-low-cost merchandise fans buy and lug around in clear plastic bags. Its television deal with CBS has long been a series of one-year contracts that are not believed to be hugely lucrative for either the network or the club. It accepts only a handful of blue-chip sponsors, and Ridley said this week that the club would donate its proceeds from a new video game partnership with EA Sports to a foundation that promotes golf.

And Augusta National is unafraid to capitalize on its food when it is bound for places beyond its gates. This year, fans could have Masters fare delivered to their doorsteps, including pounds of pimento cheese, pork and chocolate chip cookies. For good measure, the $150 packages included 25 of the dishwasher-safe plastic cups that are the tournament’s premier souvenirs.

A sandwich, drink and a cookie costs around $5.Doug Mills/The New York Times

But whatever Augusta’s financials look like, they are almost assuredly helped by the simplicity of the club’s menu. Along with the pimento cheese, which is served between two pieces of white bread, there is an egg salad sandwich for $1.50. This year brought the introduction of a new sandwich, chicken salad on a brioche bun, for $3. The most expensive selections on the menu are the beers, served in green plastic cups for the princely sum of $5.

Pimento cheese, a staple of Southern events from backyard gatherings to black-tie weddings, has been on Augusta National’s menu since the early days, and is the most famous of the club’s culinary offerings.

Nathalie Dupree, the cookbook author and pre-eminent Southern chef, said the acid in the mayonnaise acts as a preservative, clearing the way for golf fans to carry a couple of the sandwiches in a pocket or purse for a few hours and nibble at them under Georgia’s warm spring sun.

“It is sort of Southern genius that they are going to figure out a sandwich for the heat,” Dupree said. “You are always working around the heat, before air-conditioning, particularly.”

The sandwich was appearing prominently in newspaper accounts of the tournament by the 1970s, which was also when the Junior League of Augusta published its recipe book, “Tea-Time at the Masters.” The club’s pimento cheese recipe was not included, though a step-by-step guide for a concoction christened cheese paste, made from Cheddar, cream cheese and pimento cheese — at room temperature — did.

The woman who submitted it? “Mrs. Arnold Palmer,” Winifred Palmer, whose husband had already won his four Masters titles by then.

“My mother in particular was very fond of the pimento cheese sandwiches at Augusta,” said Amy Palmer Saunders, who chairs the Arnold & Winnie Palmer Foundation. “She would’ve enjoyed experimenting with anything like that in the kitchen.”

The players also revere the food, simple as it is.

Bubba Watson, who won in 2012 and 2014, said he favors the barbecue and pimento cheese sandwiches, asking club staff to hold the egg salad and slip in more pork when he orders a trio known as the Taste of the Masters. And before he won last year’s tournament, Dustin Johnson declared simply, “My favorite thing about the Masters is the sandwiches.”

To walk the course this week is a chance to hear, no matter the time, someone mulling what they want to eat. The cashiers, accepting only credit or debit cards because of the coronavirus pandemic, are waiting.

“They fulfill kind of the dream that you have,” said List, who described Augusta’s approach as “Adam Smith in his glory.”

“When you see it on TV, you think it’s a wonderland,” he said of the course. “And Disney looks like a wonderland until they stick it to your wallet.”

How a Brooklyn Arts and Food Activist Spends Her Sundays

Chipotle customers are complaining about receiving…

Here are the 12 fastest-growing food DTC brands, according…

Photos: What To Eat At The Newly Reopened Bronx Night Market

Restaurants, Bars, And Food Trucks Can Soon Apply For…

Starbucks may officially add puppuccinos to its menu soon —…