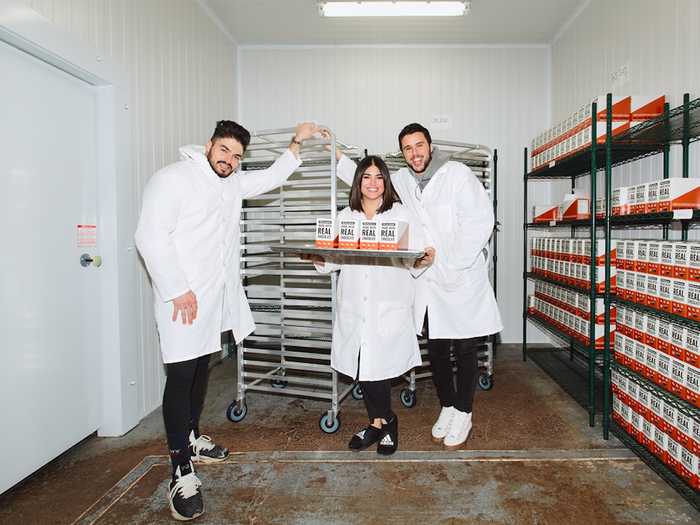 Mid-Day Squares is expanding distribution of its chocolate snack bars to the US this year.
Its founders turned down an acquisition offer from Hershey’s and are instead working toward an IPO.
They’ve also turned their business into a reality show and podcast instead of relying on ads.
See more stories on Insider’s business page.

Lezlie Karls, Jake Karls, and Nick Saltarelli are no strangers to getting attention.

As the founders of the chocolate snack brand Mid-Day Squares, they decided to promote their brand by creating their own programming: On their podcast, they talk about the dilemmas they’ve faced starting a business. They even film a reality series that they post on Instagram documenting every aspect of their lives running the fledgling brand.

But when the Hershey Co., one of the largest candy and snack companies in the world, came calling for an acquisition in March, Mid-Day Squares was not interested.

Many food startups sell to big players like Mondelez or General Mills “like clockwork” when they hit $100 million in sales, Saltarelli said. Mid-Day Squares plans to stay independent, opting instead to pursue an initial public offering.

“We have to see it all the way through,” Saltarelli said. “The censorship that would be provided to us if we were absorbed by another company would kill the entire purpose of what we’re trying to do.”

Mid-Day Squares got its start in Canada in 2018, with the Karlses, who are siblings, and Saltarelli, who is married to Lezlie, selling their bars out of a condo kitchen. The brand has since raised about $8 million from investors including Boulder Food Group and Selva Ventures and is expanding into the US this year with a debut in June at Sprouts Farmers Market and a launch at Whole Foods later this year. It sells in about 1,800 stores, including Canadian grocery chains like Sobeys and Metro.

The brand’s flagship product is a peanut-butter bar topped with chocolate, or “a Hu chocolate bar slapped on top of a Perfect Bar,” as Saltarelli describes it. It’s meant to be a substantial snack in between meals.

The chocolate and snack-bar categories have both caught the eye of major food companies lately: Perfect and Hu have both been acquired by Mondelez within the past two years. Other deals, like Mars’ decision at the end of 2020 to buy Kind Bar, have also highlighted big food companies’ interest in acquiring smaller snack foods.

Saltarelli and the Karlses ruled out selling the company to the highest bidder early on. As they raised their initial rounds of funding, Saltarelli said, they told prospective backers they would be investing in Mid-Day Squares for at least a decade. They also pointed to two exit strategies for investors: Take the company public, or sell your stake back to the founders for a profit.

“I was very clear in the pitch decks: ‘If you’re looking for a business to sell to another business, we strongly advise that you do not invest,'” Saltarelli said.

Victoria’s Secret is finally raising its prices after…

7-Eleven Will Celebrate Free Slurpee Day for an Entire Month…

Life in front of the camera

Like most early brands, getting noticed was a challenge for Mid-Day Squares. So in mid-2018, Jake Karls pitched an idea: Turn growing the business into a story for customers to follow.

Early on, he encouraged his sister and brother-in-law to film what happened in their workspace on their phones. Soon, Mid-Day Squares brought on media professionals, including a videographer, to help.

“There’s no more personal life,” he said. “Your personal life is now mixed with your business life because it’s all under one roof, and you’re going to film everything.”

The result is a series of videos, reels, and other posts on Instagram chronicling the highs and lows of running a startup food brand, from securing distribution deals with new retailers to hunting down obscure ingredients when a supplier ran out. Mid-Day Squares has about 44,700 followers on Instagram.

On the podcast, which has reached 32 episodes, the team talks about other companies they admire, like Tesla and LinkedIn, and explain some of the largest strategic choices they’ve made with Mid-Day Squares.

“When our consumers would go to the grocery stores and go to the shelf where they see the product, they no longer see a healthy, great-tasting chocolate bar,” Saltarelli said. “They say, ‘Oh, god, I know those people'” as soon as they see the logo and product, he added.

Both the content strategy and the refusal to sell to a large food company have helped Mid-Day Squares stand out, said Dayton Miller, a managing partner at Boulder Food Group who got to know the founders before the firm invested in the brand’s Series A and Series B funding rounds.

Mid-Day Squares is still small. Saltarelli said it planned to hit $10 million in revenue this year. But Miller said that recent food IPOs, such as Oatly and Beyond Meat, started out as small companies that had devoted buyers and a specific purpose — in those cases, providing an alternative to animal-based milk or meat — which they refined over decades.

“Oatly has been around for 20 years,” he said. “Do I think that MDS could have that kind of community and following over that period of time? Yeah, maybe.”

Miller added that Boulder Food Group was initially drawn to the company as an investor because of its product, but the social-media strategy has helped it stand out in a crowded food-startup space.

“It would scare me to go to another group and recommend a reality show,” he said.

These Clay Ovens Are Bringing Comfort to Migrants at the Border

This Finnish Brewery Is Using Goose Poop to Make Beer

Long Island: Plan For A Quick Escapade To A City With…

20 Scenic Beaches In America Known For Their Vibrant…

Experts say Peloton will emerge from the treadmill recall…