Starbucks, Flush With Customers, Is Running Low on Ingredients 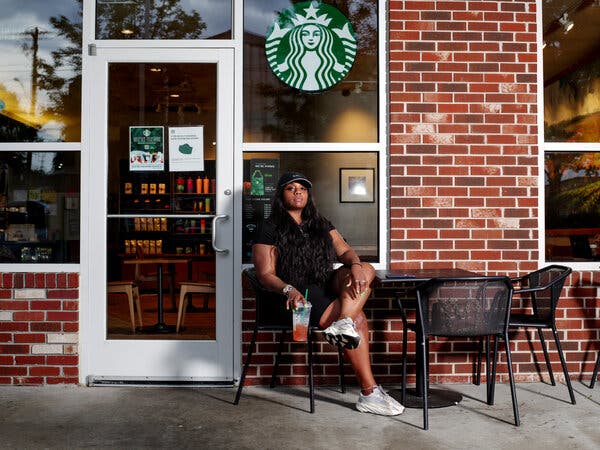 Tasha Leverette was in the mood for her favorite drink from Starbucks, an iced peach green-tea lemonade.

When she went through the drive-through of her usual Starbucks in Atlanta three weeks ago, though, she was told they couldn’t make the drink because they didn’t have any peach-flavored juice. Shrugging it off, she drove to another store. And another. And another.

Each stop brought disappointment. None of the locations had the integral ingredient.

“I said to them, ‘This is the Peach State, right?’” said Ms. Leverette, 33, who owns a public relations firm. “It’s surprising because Starbucks always seems like it has anything and everything you need.”

Across the country, customers and baristas are taking to social media to bemoan not only shortages of key ingredients for popular Starbucks drinks, like peach and guava juices, but also a lack of iced and cold-brew coffee, breakfast foods and cake pops, and even cups, lids and straws.

A video on TikTok this week featured what appeared to be a group of employees screaming in frustration over a list of ingredients that the shop had run out of — including sweet cream, white mocha, mango dragon fruit and “every food item.” The caption also said they were low on cold brew and the “will to live.”

Starbucks is hardly the only company struggling with supply issues. Earlier this spring, ketchup packets became hotter than GameStop stock. Automakers have slowed production because there are not enough computer chips for their vehicles. And homeowners are waiting weeks, if not months, for major kitchen appliances.

But Starbucks is running out of ingredients for Very Berry Hibiscus Refreshers and almond croissants after being one of the clear winners of the pandemic economy. During lockdowns, the coffee chain quickly shifted from its position as a “third place,” where people could linger to work or meet up for long chats, to a focus on frictionless transactions with customers ordering through mobile apps and drive-throughs. Company executives said this year that Starbucks had seen a “full recovery” in sales in the United States, back to prepandemic levels. 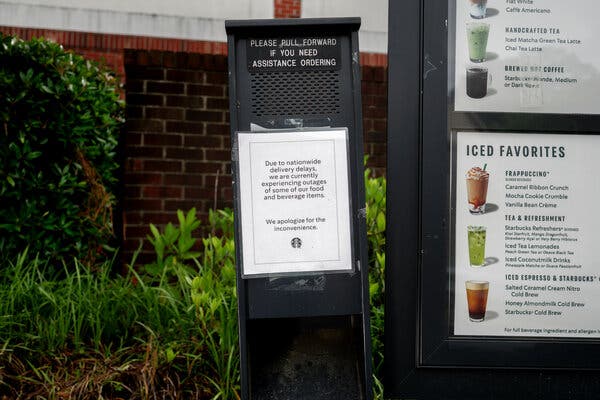 A Starbucks drive-through in Atlanta. The shortages at Starbucks have varied by location, a company spokeswoman said.Johnathon Kelso for The New York Times

In a statement, a spokeswoman for Starbucks said the company was experiencing “temporary supply shortages” of some of its products. She said the shortages varied by location, with some stores experiencing “outages of various items at the same time.” She added that the company was working with its vendors to restock the items as soon as possible, and that the supply-chain issues had not affected prices.

Although most people are familiar with the problems in the global supply chain to some extent, some Starbucks customers are still shocked — even incensed — by their inability to get their coffee exactly how they want it. Others laugh it off.

“I was told they couldn’t give me an extra shot of caramel because there was a national shortage,” Nicole Brashear, a 24-year-old pharmacy student at the University of Louisiana at Monroe, said of ordering an iced caramel macchiato with extra caramel drizzle in late May. “I just sort of laughed and was like, ‘Isn’t caramel just burnt sugar?’”

The problem for Starbucks is that it was never just selling a simple cup of coffee. For many, the experience of visiting the chain is a self-indulgent treat.

All Of The Times Food Was A Main Character On ‘Keeping…

Customers learn the language regarding sizes and special drinks and then share their customized, 12-ingredient drink orders on social media. Many look forward to seasonal specials, like this summer’s Unicorn Cake Pop and Strawberry Funnel Cake Frappuccino, which are available for a limited time.

Jeffrey Toobin returns to CNN, eight months after Zoom incident.The government vows to fix a plagued relief program for live-event businesses.Today in On Tech: Tech forgets about the needs of the 99 percent.

Orders are not barked out by number as they are at other fast-food chains but rather are announced by name, suggesting customers are friends or part of the Starbucks club, said Bryant Simon, a history professor at Temple University and author of “Everything but the Coffee: Learning About America From Starbucks.”

“Starbucks did something remarkable: taking a really ordinary product, coffee, and remaking it as an identifier of class, of culture, of discernment and of knowledge,” Mr. Simon said. “Starbucks is a way to communicate something about yourself to other people. While it has become more complicated over time, that drink still says: ‘I deserve a break in my life. I can afford to waste money on coffee.’”

There were earlier hints that supply issues could be bubbling up for Starbucks. In a late April call with Wall Street analysts, the chief executive of Starbucks, Kevin Johnson, voiced some concerns about companies in its supply chain that were struggling to hire the staff they needed.

“I do anticipate we’ll do a little more to invest and help our supply chain partners, whether it’s staff that they need in manufacturing or staffing that they need for distribution and transportation,” Mr. Johnson said.

By late May, customers and baristas were reporting shortages of key ingredients or foods in stores all over the country.

Fred Rogers knew something was wrong right before Memorial Day weekend when he opened his Starbucks app and an alert flashed that the company was experiencing shortages of certain items. He wasn’t able to order his 3-year-old daughter her favorite sandwich — sausage, Cheddar and egg — from his nearby Starbucks in Burlington, N.J. His drink, a Caramel Ribbon Crunch Frappuccino, was also not available.

“I know if you go after a certain hour that they’re going to be out of some items,” said Mr. Rogers, a 33-year-old manufacturing specialist. “But this was 6:45 in the morning.”

Customers may be unhappy, but Mr. Simon said the paucity of drinks or food items would likely only increase demand. One of Starbucks’s biggest challenges in recent years has been overexpansion, meaning it has shed some of the uniqueness that once made it special.

Ms. Leverette has tweeted her frustration. “It’s surprising because Starbucks always seems like it has anything and everything you need,” she said.Johnathon Kelso for The New York Times

“I’m sure there are a lot of heated conversations in Seattle right now about the supply-chain issues, but someone on the branding side is going to be chirping in that the scarcity may not be a bad thing,” Mr. Simon said.

Perhaps, but the issues could also be a risk if customers become too frustrated over not being able to get what they want, as they always have. When his daughter couldn’t get her favorite breakfast sandwich at Starbucks, Mr. Rogers took her to a nearby Chick-fil-A for breakfast.

And after driving to four different Starbucks and not getting her favorite drink in late May, Ms. Leverette is no longer a regular customer.

“It’s disappointing,” she said. “You go, and you’re waiting in the drive-through, and you’re only going for one thing and they don’t have what they need to make it.

“I just stopped even bothering to go.”

The hottest fashion of the pandemic is the pajama set

I tried Taco Bell and Chipotle’s drive-thrus, and…