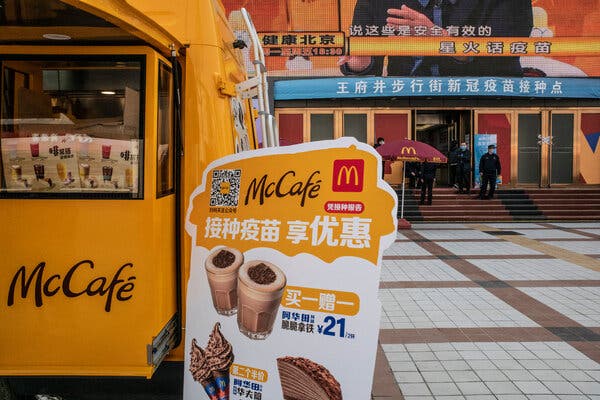 McDonald’s said Thursday that sales of Big Macs, chicken nuggets and french fries got back to prepandemic levels in the first part of the year.

Chris Kempczinski, the president and chief executive officer of McDonald’s, touted the company’s rebound, noting that it had occurred “even as resurgences and operating restrictions persist in many parts of the world.”

Profit in the quarter climbed to $1.5 billion, from $1.1 billion a year earlier.

Chicken was one of the big drivers for growth in the U.S. The company brought back its spicy chicken nuggets for a limited time and entered the competitive chicken-sandwich market with its own version in February.

“While the category is very competitive, we are so far exceeding our projections,” Joe Erlinger, the president of McDonald’s U.S.A., told Wall Street analysts on a call. “We are selling substantially more chicken sandwiches than our previous chicken-sandwich line,” particularly in the late afternoon, he said.

Executives highlighted the company’s recently announced collaboration with the K-pop boy-band sensation BTS, which will start in late May. The company hopes to repeat some of the magic it found last year from a similar partnership with the rapper Travis Scott, when it introduced the Cactus Jack meal, consisting of a Quarter Pounder with cheese, bacon, and lettuce; a medium Sprite; and fries with barbecue sauce. The combo was such a massive hit that some restaurants ran out of key ingredients.

What remains unclear is which consumer behaviors that changed during the pandemic will stick. In the call with analysts, executives said they expected delivery and drive-through to remain important. But breakfast has been slower to rebound.

“We believe that certainly as some consumer habits return to prepandemic ways of life, that the breakfast day part will continue to come back,” Mr. Erlinger said. “And similarly to how it was a real market-share battle prepandemic, we think that market-share battle will absolutely continue and we’re ready and prepared for that.”

Spring In NYC Brings A Sense Of Optimism For Beleaguered…