Chipotle will increase its menu prices as labor costs rise. 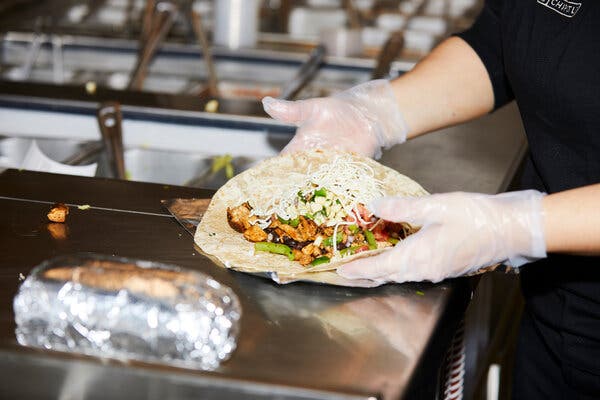 Chipotle said in May that it was raising wages and would pay workers from $11 to $18 an hour.Winnie Au for The New York Times

That burrito fix is going to get a bit more expensive.

Executives at Chipotle said on Tuesday that the fast-food chain had raised menu prices by about 4 percent to cover the cost of the increased employee wages.

All Of The Times Food Was A Main Character On ‘Keeping…

In May, in an effort to hire 20,000 employees in a tight labor market, Chipotle said it was raising wages and would pay workers from $11 to $18 an hour.

“We really prefer not to” raise prices, Chipotle’s chief executive, Brian Niccol, said Tuesday at the Baird Global Consumer, Technology and Services conference. “But it made sense in this scenario to invest in our employees and get these restaurants staffed and make sure we had the pipeline of people to support our growth.”

Job openings in the United States surged to record levels in April, the Labor Department said on Tuesday, the latest sign that businesses were struggling to hire workers as the economy reopens. Employers added hundreds of thousands of jobs in May, but the road to recovery for the labor market is bumpy.

The labor market has forced other restaurant chains to increase wages to attract job candidates. That’s a stark contrast from earlier this year, when Congress was debating raising the minimum wage to $15 an hour, and the restaurant industry argued such a move would imperil the economic recovery.

But Chris Kempczinski, the chief executive of McDonald’s, said on a call with Wall Street analysts in January that the company was doing “just fine” in the more than two dozen states that had phased in higher minimum wages. In May, McDonald’s said it was raising hourly wages for current employees by an average of 10 percent and that the entry-level wage for new employees would rise to $11 to $17 an hour based on the location of the restaurant. The pay increases apply only to its 650 company-owned restaurants; the vast majority of its nearly 14,000 restaurants in the United States are independently owned.

Even with the price increases, Chipotle executives argued that the price of their food items remained reasonable. Excluding higher-priced markets like New York, the price of a chicken burrito remains below $8, Mr. Niccol noted. He said a price increase of 3 to 4 percent equates to “quarters and dimes that we’re layering in.”

Starbucks Will Allow Customers to Use Their Own Cups Again

The Celebrity-Endorsed Bottled Water Company On a Mission

Why the Government Is Buying $40M Worth of Pistachios

‘Food Is Culture’: Alice Waters on the Cookbook That Changed…

From China’s Far North, a Paradoxical Noodle Lands in Queens

Kroger, Target, and Walmart are optimizing their delivery…