A Long-Awaited Return to Eating at Beloved New York Restaurants 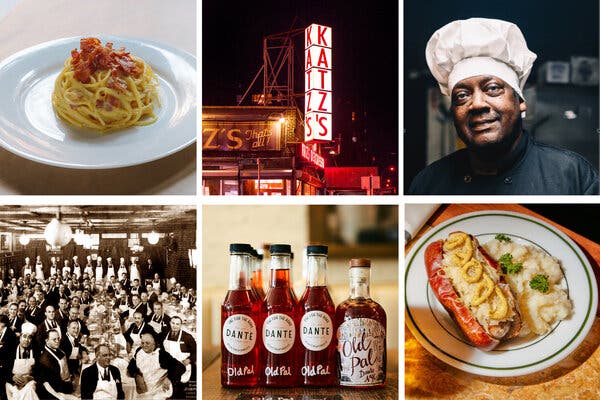 Some of the dishes, places and people that feature in Reggie Nadelson’s book “Marvelous Manhattan” and that she recently revisited over the course of a week.Clockwise from top left: Donovan Smallwood; Alamy; Nina Westervelt; Paul Quitoriano (2); courtesy of Keens

In this series for T, the author Reggie Nadelson revisits New York institutions that have defined cool for decades, from time-honored restaurants to unsung dives. For this installment, which coincides with the release of her book “Marvelous Manhattan,” she checks in on some of her favorite places.

This morning I had coffee, as usual, at Ground Support, a cafe on West Broadway just south of Spring Street. My shakerato (an Italian-style blend of espresso and ice) went perfectly with my breakfast salad (avocado, arugula and a slice of mortadella). The place was crowded — so much so that the almond croissants were almost gone — and the owner, Davide Drummond, was smiling as always, greeting locals and their dogs and wiping down the outdoor tables. He has hung on tirelessly. When the city was shut down last spring, he regularly biked the six miles from his home in Brooklyn at dawn to make sure SoHo was caffeinated.

A year ago, almost to the day, I wrote about how some of New York’s neighborhood places were making do during lockdown. Astonishingly, almost all of them, and many more, have survived. (Among the notable exceptions is Jing Fong, the dim sum palace on Elizabeth Street, whose owners were forced to give up their grand dining room and are currently looking for a new venue.) It’s been a very tough year — hard, bitter, sad — but rumors of the city’s death were, it seems, much exaggerated. I’m not unaware that whole industries (the theater, for example) are still in dire straits. But there is a strain of optimism, too. And so, to see how some Manhattan favorites are faring now, I figured I’d stop into a dozen or so over the course of a week, which would also allow me to consume something delicious at each.

A latke from Russ & Daughters served with salmon roe and crème fraîche.Paul QuitorianoKatz’s Delicatessen on the Lower East Side, whose slogan during World War II was “Send a salami to your boy in the Army.”Alamy

From SoHo, I walk east along Houston to Russ & Daughters, the appetizing store that has been part of my life since I was old enough to hold a bagel and lox sandwich. “When the shutdown happened, we were very concerned about the future,” says Josh Russ Tupper, who runs the place with his cousin and fellow fourth-generation owner, Niki Russ Federman. Luckily, they had recently built a large production facility at the Brooklyn Navy Yard and so were able to expand their shipping capacity, which, says Tupper, “kept Russ & Daughters alive and will allow us to continue for another 100 years.” And business is now returning to the East Houston Street store. I am delighted that I have to wait in line to order my lightly buttered toasted bialy with slices of Wild Western Nova Scotia smoked salmon and smoked sturgeon. I also get a half pound of sable, some latkes and a bissel (meaning a small portion) of salmon roe, which I stash in my bag, in case of emergency. Conveniently, Katz’s Delicatessen is only one block east. I run in to pick up lunch: a tongue sandwich on fresh Jewish rye with a blob of bright yellow mustard and a half-sour pickle.

The next evening, I head uptown to Schaller & Weber, the German grocery store on Second Avenue. Last June, when the owner, Jeremy Schaller, heard that the city would be allowing extended outdoor seating, he borrowed a friend’s truck and gathered everything he needed to build a pop-up restaurant, which he named Blume, in the backyard. My niece, Caite, and I sit in the Austrian-style wine garden, hidden from the city, and consume the housemade foie gras and a bottle of Riesling. “Are you vaxxed?” asks Schaller, as people do these days, and when we confirm that we are, he greets us with a hug, an exhilarating intimation of better times. 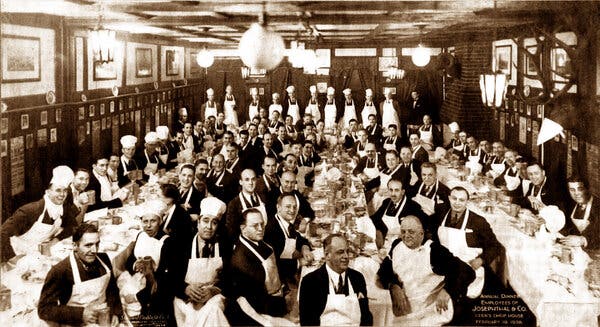 The walls at Keens Steakhouse are decorated with historical images of the restaurant like this one of a beefsteak dinner for an investment firm in 1938.Courtesy of Keens

It was touch and go for a lot of places, and many — including some that had already survived for over a century — did what they had to. When the pandemic hit, “we donated most of our meat to Rethink Food,” a nonprofit committed to reducing food insecurity, says Bonnie Jenkins, the general manager of Keens Steakhouse, which first opened in 1885. On the third day of my Manhattan tour, my cousin John and I sit in the restaurant’s covered outdoor seating area and devour a prime porterhouse for two that arrives rare in the middle, lightly burnished and slightly crunchy on the outside. We share a Manhattan and reminisce about how, for our fathers in the 1950s, a big night out in the city meant cocktails and steak in the dark, wood-paneled dining room inside. When the outdoor dining pavilion opened in December, it was 28 degrees. “But amazingly,” Jenkins says, “people still came.”

While trying to walk off the steak, I stroll past Le Bernardin on West 51st Street and think how glad I am that it’s reopened. I love this place unashamedly, for its food and its style, which is formal but never pompous. To enter is to be transported to another world. The French have a word for it: “dépaysement.” Translated literally, it means the feeling of leaving one’s country, but the real sense is an escape from the quotidian. And for me, that means the Egg. A dessert conjured up by Bernardin’s former pastry chef Michael Laiskonis, it’s a kind of milk chocolate pot de crème layered with caramel foam and maple syrup, and served in a pale brown eggshell. Rich and creamy, it’s topped with just a few grains of salt to add a sublime and seemingly serendipitous tang.

Charles Gabriel, the chef and owner of Charles’ Country Pan Fried Chicken, which will soon reopen in a new location.Nina WesterveltA plate of Gabriel’s fried chicken, with sides of greens and macaroni and cheese.Nina Westervelt

Of course, not everything is as it was. I heard recently that Charles Gabriel lost the lease on Charles’ Country Pan Fried Chicken, his storefront restaurant on Frederick Douglass Boulevard that for decades served some of the most succulent chicken in the city. But on the fourth day of my expedition around town, my friend Curtis Archer, sometimes referred to as the mayor of Harlem, calls. Far from going out of business, he tells me, the restaurant’s owner, Charles Gabriel, is on the verge of becoming a fried chicken magnate. During the lockdown, Gabriel shifted his focus to home delivery, something he hadn’t done much of before. Business boomed and investors appeared. As a result, Charles’ Country Pan Fried Chicken will soon open a new location on Edgecombe Avenue and 145th Street, and after that an outpost on the Upper West Side and another in Brooklyn. At 73, Gabriel, who grew up one of 21 kids in a North Carolina sharecropping family and learned to cook from his mother, will finally get the profile he deserves.

Deprived of Gabriel’s food for the moment, however, Curtis and I stop at Red Rooster, Marcus Samuelsson’s restaurant serving elevated takes on American home cooking, for the hot honey chicken and the cornbread with roasted tomatoes and corn butter. After that, we grab a muffuletta — rich and spicy with mortadella, coppa, mozzarella and Sicilian olive salad — at Settepani, the former Brooklyn bakery that serves classic Italian food on Lennox Avenue.

Tenacity, invention, excruciatingly hard work and, in some cases, not a little luck, have kept all these establishments going. I called my latest book “Marvelous Manhattan” not just for the city’s skyline and glamour but because of its people, who routinely, one generation after the next, stick it out, suck it up and keep it going. When restaurant dining rooms were forced to close at the start of the pandemic, Linden Pride and Nathalie Hudson, the owners of the bars Dante and Dante West in the Village, started bottling their much-awarded cocktails for takeout. There was no shortage of demand. “It was all Negronis and anything with tequila or mezcal in it. Often it was Negronis with tequila and mezcal in them,” says Pride. In NoHo, Il Buco Alimentari sold its pizzas for takeout. And farther west, Raoul’s offered to-go kits so customers could make the restaurant’s celebrated burger at home. Happily, the place is now doing such good business again that friends, knowing I live close by, call me to ask if I can get them a table.

Toward the end of the week, before I swear off carbs again, I squeeze in a visit to Il Posto Accanto, the wine bar on East Second Street, for a plate of spaghetti alle vongole, spicy and piled with fresh clams. To stay afloat during the past year, Il Posto offered gift certificates. The same was true at Di Palo’s, the Italian fine foods shop on Grand Street, where I stop by to pick up a ball of mozzarella, just out of the vat, still warm and dripping with milk. “People bought the gift certificates, sometimes a thousand dollars’ worth each,” says Lou Di Palo, who owns the store with his siblings, Sal and Marie. “I kept saying to use them, but somehow people ‘forgot.’”

Spaghetti carbonara at Il Posto Accanto in the East Village.Donovan SmallwoodBottles of Dante’s Old Pal cocktail, a blend of Wild Turkey rye, Campari and Noilly Prat dry vermouth.Paul QuitorianoSal, Marie and Lou Di Palo, the three siblings who own and run Di Palo’s, the Italian fine foods store that has been in their family for over 100 years.Nina Westervelt

On the final evening of this self-guided tour, my friend Michael, a delightfully reliable eater, is waiting for me at Le Gigot in Greenwich Village. Against all odds, the tiny Provençal bistro reopened a few weeks ago on Cornelia Street, where it’s been since 1996. I arrive feeling an intense need for chef Alioune Ndiaye’s bouillabaisse.

Walking home along Houston Street afterward, I see something that appears at first so strange and wonderful, it seems like a mirage. It is Film Forum, my favorite movie theater, open again and all lit up. Movies! Despite its immense problems and incalculable losses, this city is not dead, not even close.

I end my spree at Fanelli’s on Prince Street, my corner bar and cafe. I’ve spent a lot of time here these past 12 months. Sitting outside in the freezing cold last winter, I would eat the chicken-and-vegetable soup while huddled in a blanket that the owner, Sasha Noe, kept behind the bar for me. Last July, after over three months of lockdown, Fanelli’s put a couple of tables on the sidewalk. Naomi, Mary, Sheena and the other servers were smiling fit to bust; so was a local friend I’d met for dinner. Neither of us had been out to eat for months. He had a burger in a cardboard box. I had a BLT. And we agreed it was probably the best meal we had ever eaten.